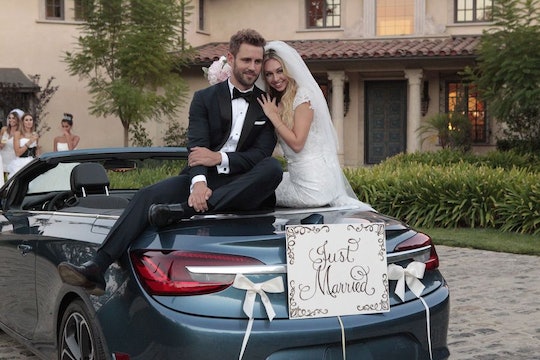 Corinne Could Come Out On Top On 'The Bachelor'

I don't know if I see shoving your tongue down a guy's throat as the best way to win him over when competing with a couple dozen other women, but with The Bachelor, it really doesn't hurt. And since it obviously didn't stop her from getting a rose on the first night, will Corinne win The Bachelor? She made a strong impression on pretty much everyone the first night in the mansion and even if that means she's already been named the Season 21 villain, that really has nothing to do with her chances of winning The Bachelor, especially if Nick takes a liking to her, which he very well may.

Just look at Josh Murray, the alpha male uber-jerk of Season 10 of The Bachelorette, who won against Nick despite being kind of terrible in the end. That's not to say Corinne is on that level from what viewers have seen so far. To be fair, we don't know her very well just yet. But being the bad girl of the show doesn't mean you can't win over the Bachelor in the end. And at the end of the day, all that really matters is gaining support and affection from the actual Bachelor in question. So when you consider the sneak preview that was released just after Monday night's premiere (and featured things getting pretty hot and heavy between Nick and Corinne) it's definitely possible she could come out on top and win The Bachelor.

On the Jimmy Kimmel Live! special after the season premiere, Kimmel spoke to Nick about everything that went down during that first night and the biggest moments so far. For the most part, Nick was totally in support of Corinne and everything she brings to the table. When asked about her abrupt kiss with the new Bachelor, Nick said, "I like a woman who knows what she wants," and he really has said time and again how much he appreciates confidence in a woman, so maybe Corinne's ego will serve her well this season.

Kimmel went on to predict that the final four contestants will be Corinne, Danielle L., Rachel, and Vanessa. And back in December, before the season had even premiered, Jennifer Aniston predicted on Jimmy Kimmel Live! that the final four women this season will be Liz, Rachel, Danielle, and yes, Corinne. With odds like those and celebrities already rooting for her, you have to wonder if there is going to be something more to Corinne than just drama and late night visits to Nick's room.

So will Corinne win The Bachelor? To some, 24 years old might sound young to get married, but if she's able to make her way into Nick's heart by the end of the season, then she stands a real chance. But if not, there is always Bachelor in Paradise, where things are always a little juicier and a lot more fun anyway.