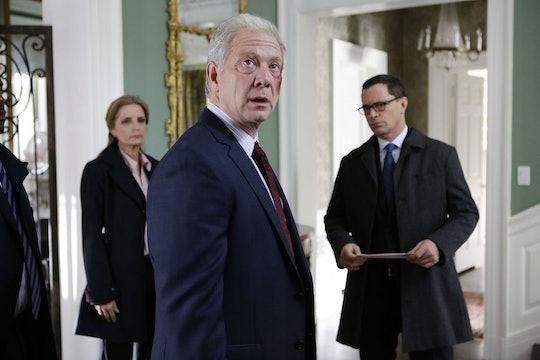 Cyrus Could Have A Grim 'Scandal' Fate

The last fans saw of Cyrus on Scandal, he was working with the resident cannibal murderer in prison to kill Tom and take down the guard who ordered his beating out in the yard. But while Cyrus was in the throes of killing Tom, the sociopath super-secret B613 agent yelled out, I’m innocent,” finally clearing his name, and Cyrus’ in the process. But no one else really knows this for sure yet, so will Cyrus die on Scandal?

The death penalty has been brought up a few times and Fitz officially put it back on the table as punishment for Cyrus orchestrating Frankie Vargas’ death (or so he thought). But now that viewers know for sure that Tom, who implicated Cyrus, didn’t have anything to do with it, how long will it be before the evidence is actually presented?

At the end of the last episode, Olivia and her gladiators had discovered that Tom wasn’t even in town the night Vargas was murdered, meaning that his new claims of innocence are totally legit, but how long it will be before any concrete evidence is presented still remains to be seen. There’s also the little matter of Cyrus arranging for a guard to be killed while he was in prison, so he could very well face new, and actually grounded, charges for that crime.

If the evidence isn’t given to Fitz immediately, Cyrus could face the death penalty on Scandal. It could be a case of getting the information and making the call right on time, saving Cyrus from execution, or they might be too late in the end. Personally, I don’t see Scandal without Cyrus right now. He’s not the best person, but he’s also been part of a lot of the bigger plot points in the series and this hiccup probably isn't going to take him down as a whole. In fact, once he’s released from prison (as long as he can pin that guard attack on that guy who ate his family or whatever), Cyrus will probably want to find Vargas' true killer more than anyone.

But something tells me there will be no Oval Office for the guy, despite his dream-like vision while he laid unconscious in the prison courtyard. Cyrus can always come back strong and do what he does best in advising those in power, but even with his name cleared (as long as it actually happens), no one is going to want him as the president. So taking down Vargas' real killer on Scandal will likely be what drives him for the remainder of the season. If he lives, that is.