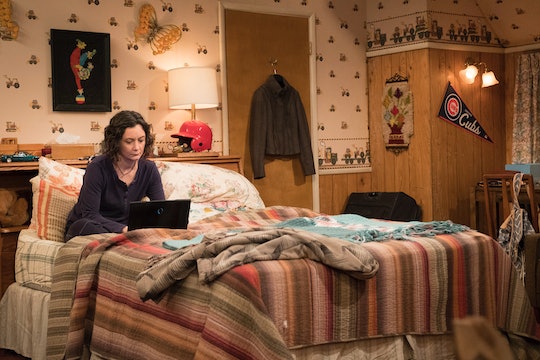 For fans of the original Roseanne, it probably wasn't easy to learn that Darlene and David are no longer together. They were, after all, a couple who made it through so much together, like when their daughter Harris was born prematurely. With the reboot of the original series comes hope for a long and vibrant future regarding all of the characters, though, so will Darlene and David get back together in the Roseanne revival? I'd say anything is possible at this point.

The revival has already been renewed for an additional season ahead of the Season 10 finale, so there will definitely be time for the separated couple to find their way back to each other, even if it doesn't end up happening right away. In fact, according to Deadline, Season 11 will consist of 13 episodes instead of the nine that were ordered for the initial revival. That means there will be more than a dozen episodes to allow for David and Darlene to make up and get back together. I know Roseanne is supposed to be about an entire blue collar family, but let’s be real — at this point, we’re all here for some David and Darlene love. With more episodes and potentially more than one additional season ahead, I’d say the odds are in our favor.

After the season premiere on March 27, the show brought in a total of 21.89 million. Should the rest of the season progress in a similar way, I don't see why the revival wouldn't be given more season renewals in the years ahead. "The show is as fresh and relevant today as it was when it left the air 21 years ago," ABC Entertainment president, Channing Dungey, said in a statement. "We can’t wait to see what the Roseanne team has in store for next year."

Since there is at least one more season of the Roseanne revival ahead of us, I would imagine that there will be multiple ways to bring Darlene and David back together. So far, from what Darlene has said on the show, they aren't divorced yet but rather just separated. If they’re still legally married, then maybe there’s hope for an easier reconciliation.

It’s also not known exactly why David and Darlene broke up on Roseanne, but given their history, there almost has to be a chance that they’ll be able to work things out. It wasn't long after Becky and Mark became a couple that Darlene and David started dating. Since their initial connection early on in the series, they had a few hiccups, but always managed to find their way back to each other. There’s no reason to suggest that they won't be able to do the same thing now, even if their relationship problems are probably a bit more grown up than they were when the two were teenagers.

Still, they do have two children together, and although that doesn't mean a couple has to remain together by any means, it does give David and Darlene a little extra motivation.

Right now, and for the duration of Season 10, they’re likely going to remain separated, especially since Johnny Galecki is only scheduled to appear in one episode, but they’ve always seemed like endgame material. Depending on what went wrong in their marriage, it’s going to be a long road back for them, but David is as much a part of the Conner family as anyone, so it’s bound to happen. Right?