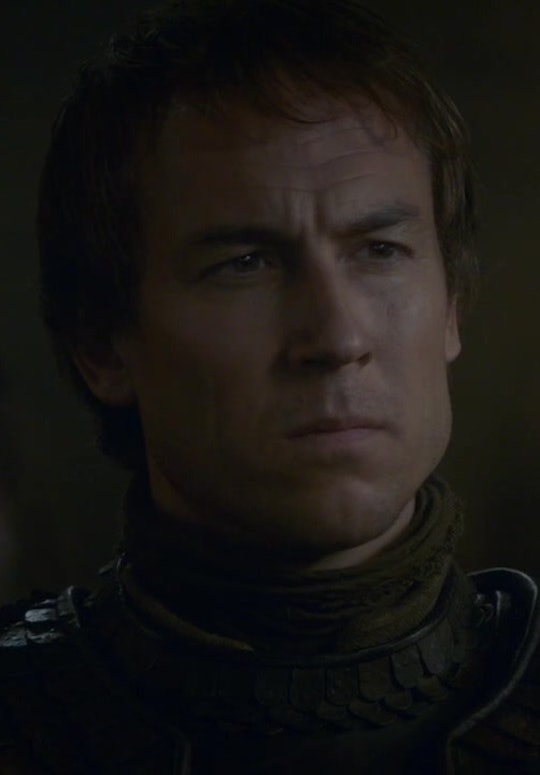 Will Edmure Die On 'Game Of Thrones'? He's Another Hostage For Leverage Over The Starks

There are many characters we haven't seen for years on Game of Thrones, but they aren't forgotten, especially those who were present at the famed Red Wedding (you know, one of the saddest events on the show ever). In Sunday's episode of Game of Thrones, we got to see Edmure Tully, Catelyn Stark's brother, once again, now in shackles and being promised release. But since Walder Frey made that promise, you have to wonder, will Edmure die on Game of Thrones? By now, we're plenty familiar with the terrible luck the Starks tend to have and while Edmure isn't a Stark by blood, he's still one of the only living uncles the Stark clan has at this point.

Just because he was carted away after the Red Wedding (his wedding, need we remind y'all), it doesn't mean that he matters any less to the Game of Thrones arc, and what better way to bring Walder Frey back into the mix? Since the old man is responsible for the slaughter that took place and, by that tune, linked to the ever deplorable Boltons, we've got to assume that Edmure's role is going to be similar to that of Rickon's at this point.

An important question to consider is, what does Walder Frey want? The short answer is that he wants Riverrun, which he had after succeeding in slaughtering many of the Starks at the Red Wedding, but lost to the Blackfish. When Walder sends for Edmure, who has up until this point been totally M.I.A. and all but forgotten, it is clearly with the intention of using the poor broken guy to get back the Riverlands. But how will he accomplish this and will Edmure Tully die for it? Chances are, Walder Frey will want to use Edmure as bait of sorts in order to get Riverrun back.

It's no secret that Sansa Stark, the wardeness of the North, has a bit of power, if only with Northerners themselves, so it isn't totally out of the question to appeal to her to use it to give Walder Frey want he wants so that she may have her mother's brother back safely. It's not like she doesn't have 110 other things going on right now or anything. In the promo for Episode 7, The Broken Man, we see Sansa writing a letter to someone. Could be Frey, could be Ramsay Bolton. But then in another scene, we hear her saying that she did what she had to do. Which, again, could mean a number of things since she currently has no shortage of problems. Then again, Littlefinger is a childhood friend to Edmure, so it's also possible that Sansa may be able to enlist the help of him. You know, he kind of owes her at this point.

Right now, though, the only family Edmure Tully has are his Stark nieces and nephews, so if Edmure Tully dies on Game of Thrones after being reintroduced as the only survivor of the Red Wedding, it will have been a serious waste of time.