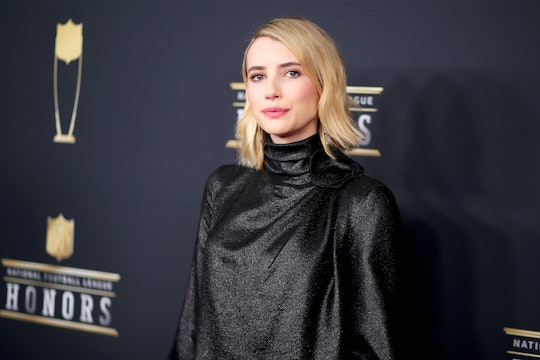 Emma Roberts May Be Resurrected For 'American Horror Story: Apocalypse'

Since American Horror Story Season 3, Emma Roberts has been in just two other seasons, so she’s not exactly an AHS staple at this point. But her roles over the years have been memorable in their own ways and her first big part in the franchise as Madison Montgomery in AHS: Coven was certainly important. So, will Emma Roberts be in American Horror Story: Apocalypse? It is, after all, the Coven/Murder House crossover season. And Madison was probably the best and worst witch of Season 3, so she almost has to be included as a main cast member this time around.

Technically speaking, Madison was dead the last time viewers saw her in the AHS: Coven finale. Kyle strangled her to death after she refused to bring Zoe back to life during the series of tests to see who the next Supreme witch would be. Spalding, the house’s oh so creepy butler, took Madison’s body to use in his doll collection and her Coven arc ended.

But judging by the AHS: Apocalypse promos, that wasn't necessarily the case. In one scene, Madison is walking with the other witches of the coven, and in another, she says, "I bet you thought you’d seen the last of me." So chances are, by some means of magic, Madison will be back to either join the good witches in AHS: Apocalypse or once again be a foe to them.

Around the same time that Season 8 started filming, Roberts posted a quick video on her Instagram, in what looked like a Madison costume, and said a quick but totally in character, "Surprise, bitch. Bet you thought you’d seen the last of me." And for most fans, that was enough confirmation that the witch everyone loves to hate will be back for AHS: Apocalypse, come September 12.

AHS creator Ryan Murphy also revealed to Entertainment Weekly that fans could expect a lot of returning AHS characters and stars to the crossover season. "You will see so many fan favorites return that you’ll feel like it’s The Love Boat," Murphy said. "It’s a very high concept. It’s a season unlike anything we’ve done because there’s a big hook to it. There’s a huge thing that happens in Episode 5."

In 2013, Roberts told Collider that she’d been waiting for Murphy to offer her an AHS role for a long time, as she was a big fan since the show’s beginning. "I’d told him that I wanted to be on the show since the first season 'cause I was obsessed," she revealed. "Any time I’d run into him anywhere, 'cause we’re kind of friendly, I’d be like, 'When are you gonna put me on American Horror Story?' And he randomly just called me, one day. It was so surreal."

From there, Madison was born, but after she died (for the second time) during AHS: Coven, Roberts was brought back to play a smaller role on AHS: Freak Show and then again on AHS: Cult. This time around, I expect her role to be bigger than the past couple of seasons, if only because Madison herself is such a big personality.

In August, Murphy posted an Instagram photo of Roberts as Madison in the backyard of the famous Murder House with the caption "Madison amongst the backyard bones at Murder House. AHS Apocalypse premieres Sept 12." Fans might remember the ruins from the gazebo that Ben Harmon built to hide a dead body back in Season 1. So while it’s unclear how Madison will be portrayed this time around, it looks like she’s going to be in the thick of it as the coven makes their way to the house for a crossover season of epic proportions.