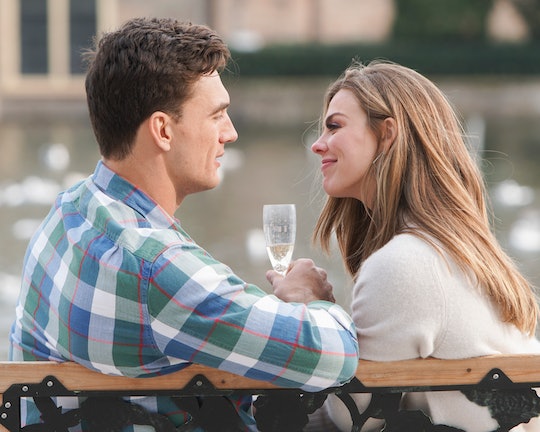 Hannah & Tyler Could Have A Future After 'The Bachelorette'

The two-part Bachelorette Season 15 finale was a series of highs and lows. Hannah chose the man she wanted to be with and after Jed's proposal, she was head over heels in love with him. They enjoyed their secret weekend getaways post-Bachelorette until the news broke about Jed's ex-girlfriend and the shiny veneer of their relationship was stripped away. And now that Jed is out of the picture, fans can't help but wonder if Hannah and Tyler will get together after The Bachelorette.

If the majority of Bachelorette fans had it their way, Tyler and Hannah would ride off into the sunset at the end of the finale special. But as Hannah said herself, she realized she doesn't need to be married, but wants to. So even if they get back together, it might be under the terms of starting a more slow-paced relationship outside of the show rather than jumping into another engagement.

Hannah did admit that her feelings for Tyler didn't just go away after she chose Jed over him and there is the chance she found more clarity after officially ending things with Jed. Any former Bachelorette contestant might seem like a better option for her after the trainwreck that was Jed this season. But there was clearly something between Hannah and Tyler before she broke things off with him in Greece and it could be what they need to remember to officially be together again.

While there might still be something between Hannah and Tyler, it might not be as easy as just jumping back into their former relationship. Hannah called their relationship "real" and "special" on The Bachelorette finale special and she admitted that her feelings didn't go away yet. She also said that she is confident enough to be on her own, but recognized that she is single now, which means she is available to date Tyler if it works out that way. Then, Hannah asked Tyler out for a drink and fans everywhere are screaming.

Tyler and Hannah agreed they want to see how it works between them outside of the show and away from the cameras. So if they have the same spark they did on The Bachelorette when Tyler was *this* close to proposing to her, then they could be together. It might have taken wading through drama with Jed, but Hannah could have the partner she wanted in Tyler.

Because The Bachelorette "After the Final Rose" special was live, there are no clues to suggest Hannah and Tyler are officially dating outside of the show. I'm guessing a lot of fans would like it to be that way, however, because fans were shipping Tyler and Hannah and living in denial about Jed long before Tyler made it to the final two. Right now, all fans can do is hope that Tyler and Hannah work out, if only to give Hannah the happy ending she was after when she agreed to be The Bachelorette lead this season.

Tyler has wanted the best for Hannah more than almost anyone else this season. He is the most logical option for her to move on to after breaking off her engagement with Jed. Tyler consistently championed Hannah when she went after what she wanted and called out other men for not being genuine.

If there is anyone Hannah should backtrack with from her season, it's Tyler. Judging by their reunion on "After the Final Rose," there is still something lingering between them. If it's enough to lay the foundation for a new relationship, then Hannah and Tyler could get together now that The Bachelorette is over.