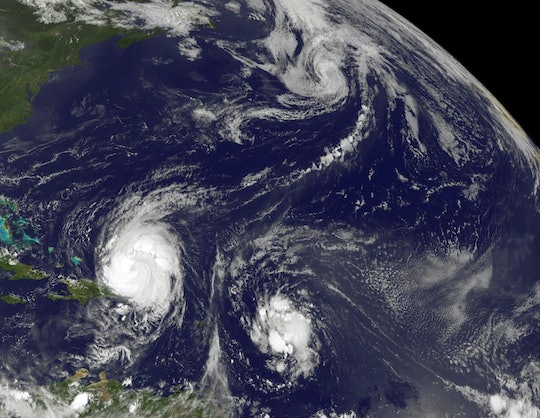 Is Hurricane Katia Headed For Texas?

This has already been a record-breaking year for hurricanes, and it doesn't look like the world's out of the woods just yet. In the wake of the devastation caused by Hurricane Irma in the Caribbean and Hurricane Harvey in Texas, there are two more hurricanes on the horizon that could cause potential trouble. And it doesn't look like Hurricane Irma has finished wreaking havoc either. But for the people of Texas, one of the other storms is especially making them nervous. As the state begins to recover from Hurricane Harvey, many are worried that Hurricane Katia will also hit Texas.

Another hurricane would clearly disrupt the slow recovery that has begun in Texas after Hurricane Harvey flooded the Houston area and reportedly left more than 60 people dead in its wake. According to NBC News, 70 percent of Harris County was submerged under a foot and a half of water and caused damages estimated at approximately $180 billion, including over 200,000 homes.

So the very last thing the people of Texas would need as they begin to head back to work and repair their lives would be another storm. Thankfully, weather specialists have reported that Hurricane Katia will not make landfall in Texas. While that's certainly a relief for Texans, the people of Mexico might be in for some serious rainfall and high winds.

The Category 1 storm is churning in the Atlantic off the Gulf of Mexico and is expected to make landfall near Tuxpan and Veracruz late Thursday evening and into Friday. The storm remains a Category 1 hurricane (the lowest threat level, with winds around 80 mph), according to AccuWeather, unless it continues to gain strength by feeding off the warm waters of the Bay of Campeche. Then it could become a Category 2 storm.

According to hurricane expert Dan Kottlowski, Hurricane Katia could potentially become a life threatening event for those in its path. According to AccuWeather, he said:

Rainfall totals will average 5 to 10 inches with localized 15- to 20-inch amounts. This will lead to life-threatening flash flooding and, for the higher terrain, mudslides.

The strong winds may cause power outages, and the heavy rainfall could make roads impassable.

Hurricane Katia is off the coast of Mexico. Hurricane Irma is barreling towards southern Florida. And Hurricane Jose, it's still whipping itself into a frenzy in the Atlantic Ocean and could be skimming by the Caribbean islands so recently ravaged by Irma — not expected to make landfall, but potentially battering the struggling tropical islands with high winds and heavy rains.

This is the first time since 2010 that three active hurricanes have formed at the same time in the Atlantic Ocean — and let's hope it's the last.