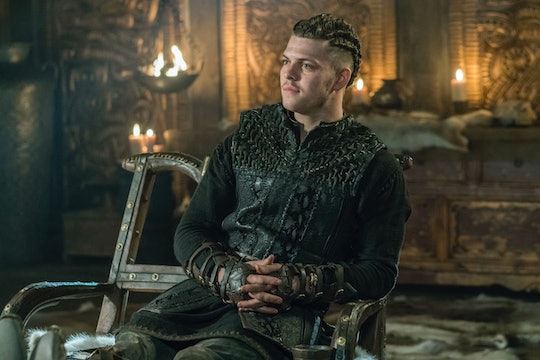 Ivar's Luck On 'Vikings' Could Be Running Out

Despite having a brittle bone disease which led to the young Viking leader's moniker Ivar the Boneless on Vikings, Ivar has led multiple battles against his enemies and come out on top, for the most part. But since right now key characters are dropping like flies, will Ivar die on Vikings too? He probably has a long life ahead of him if the History Channel drama plans to stick close to the history books. Obviously the show dramatizes some storylines and characters for TV’s sake, but the different Vikings and important battles are based on actual recorded history. The real life Ivar the Boneless died in 873 AD and since in the show he was born in 800 AD and seems far from elderly, his death probably isn't imminent.

Right now, Vikings Season 5 Part 2 is airing on TV, but Alex Høgh Andersen, the actor who plays Ivar on the show, let it slip in a recent interview with The Gate that he’s currently filming Season 6. He did admit during the interview that "you never know what’s gonna happen," though I’d say it’s all but certain that Ivar isn't going to die in Season 5 or 6 based on his actual historical life span.

Historians have theorized that Ivar suffered from Osteogenesis Imperfecta or brittle bone disease, based on his name and physical description, and that it eventually led to his death. Right now on Vikings, he seems to be more vicious than ever, leading some fans to believe that he might meet an untimely death, if only to finally end his reign. Amid the gratuitous sexual content and bloody battlefields, Vikings has done its best to follow history. Whether you love Ivar or love to hate him, à la Joffrey in Game of Thrones, he’s likely here to stay.

In the past, Ivar’s death on Vikings has been teased, however. During Season 4, Aslaug warned him that he would die in a storm if he went to England. The storm she foresaw only shipwrecked Ivar and the others instead of resulting in his death. Now that he’s the leader of Kattegat, and Rollo has returned, he could be put in more dangerous circumstances. Some fans seem to agree.

Express.co.uk ran a poll to gauge fans’ feelings about Ivar’s future on Vikings and 32% voted that he’ll be killed by Rollo, 20% said he’ll be killed by Bishop Heahmund, and 38% of those who voted think he’ll live. Maybe he won't die, in order to keep the story as historical accurate as possible, but he could fall from power for a little while, thus putting him in his place.

At San Diego Comic Con, Anderson hinted that his Vikings character isn't going to be doing so well despite winning the battle at the end of the first half of Season 5. "He's in a bad place and he didn't even get to kill Lagertha," Anderson said. "He’s mad."

If Ivar doesn't die soon, he could continue his rule in Kattegat or be forced out after another battle is fought. One of the things Vikings has become known for is its intense and realistic battle scenes and just because Ivar won an important one and is sitting pretty now, it doesn't mean he’s going to be in that cushy position forever. I don't think he’ll die just yet, but sooner or later, someone is going to come for his head, literally and figuratively.