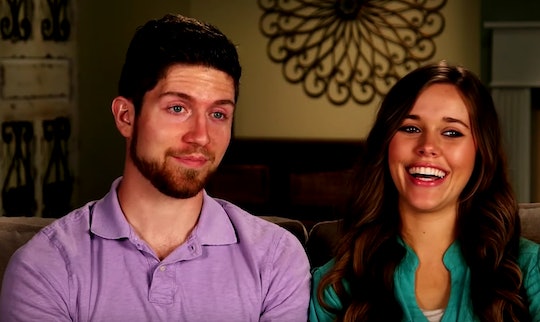 Jessa Duggar Is Pregnant With Baby #3, So Will She Give Birth On 'Counting On'?

Now that Jessa Duggar is officially in her third trimester, the countdown is on for when she gives birth to her third child. The TLC staple, along with her siblings (the stars of TLC's Counting On) are no strangers to babies (or TV cameras). So, it makes sense that people are already wondering if Jessa Duggar will give birth on Counting On when it comes time to delivering baby number three. History seems to have a way of repeating itself, so it seems that all signs are pointing to yes.

Duggar is around 31 weeks pregnant, according to her new Instagram post, which means that there will be about nine weeks or so until she gives birth. There is a lot that Duggar has not told fans about her pregnancy — fans still don't know the sex of her baby (or whether or not she is keeping that a surprise until the baby comes) or her exact due date (she's reportedly due around sometime in the late spring). It's also a little unclear why she is keeping these things private, but she could be saving all of these things for when she gives birth during a future season of Counting On.

She has given birth on camera to both of her children.

In December 2015, during an episode of Counting On (when it was still titled Jill and Jessa: Counting On), Duggar gave birth to her first child on camera, according to Cosmopolitan. This birth was super hard on her — viewers watched as the delivery lasted 48 hours, according to People, and saw Duggar rushed to a hospital after having complications while trying to give birth at home. "I had dreamed about those first moments, getting to breastfeed right away, all that," Duggar told People at the time. "And so when I had to go to the hospital, it was a shock."

When it came time to delivering her second child in front of Counting On cameras, it was just a little bit easier. Viewers tuned in to TLC in June 2017 to watch Duggar give birth to her second son, Henry. This time, Duggar was successfully able to deliver at her own home and didn't have to be rushed to the hospital, according to The Daily Mail.

"All of the stress of labor was behind us and you just look at that little miracle of a baby in your arms...there's nothing like it in the world," Duggar said.

Given how willing she was to share these two births, she could very well give birth to her third child on camera.

Although fans might not see her give birth this season (they have to wait for her to give birth, first), it's highly likely that she will give birth during the next season of Counting On.