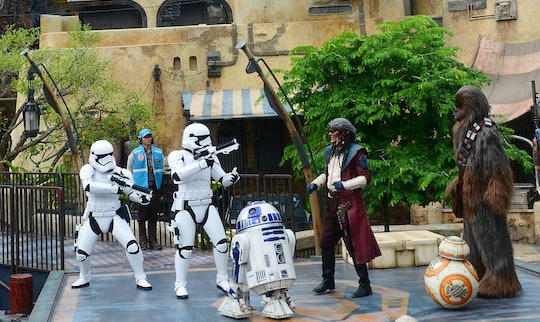 From the moment that Disney announced that it would add a Star Wars' themed attraction, enthusiasts have been clamoring to get their hands on all of the lightsabers, blue milk, and interactions with Chewbacca that Disney has to offer. But parents of little kids are pretty apprehensive about scheduling that much time out of their vacation if there's nothing there for them. Will little kids like Disney World's new Star Wars Galaxy's Edge?

Whether or not your littles will love Galaxy's Edge really depends on their age and their attention spans. The rides that are available aren't really designed for the littlest Stormtroopers. To ride Millenium Falcon: Smuggler's Run (now open), you must be at least 38 inches tall. To ride Star Wars: Rise of the Resistance (Opening December 5) you must be at least 40 inches tall. Now, my kids were only three years old when they hit 38 inches, but they would not be prepared for this virtual reality style, interactive thrill ride. In fact, it would have scared the absolute green milk-tinted crap out of them. That's not to say there aren't other activities there that littles would like. Savi's Workshop, where you build your own lightsaber, or the Droid Depot, where you customize your own droid, are right up small kids' alleys.

I understand the need to fully vet your itinerary for your trip to Disney. For the past few weeks, my husband and I have been planning a family trip to Disney World. Let me tell you, it is pretty overwhelming. Choosing a meal plan, a hotel, which fancy character breakfast to attend... it's a lot. One of the things that I know I wanted to be a big part of our trip is all that the Star Wars Galaxy's Edge attraction has to offer, but I have two kids who aren't the best on rides. (It gets messy.)

I worry if it's even worth it. Will little kids like Disney World's new Star Wars Galaxy's Edge if they don't do rides? As we all know, Disney is our omniscient benevolent overlord, and they know what we want even before we know. (Save for the Forky thing, but that's a grievance I'll file with management later.) They have it set up that the whole thing is extremely family friendly... but not sensory friendly. As the mom of a child with autism, I know the differences can be huge.

From the time you walk in, from the gift shops to the interactive experiences, they have something for every age. While you might not be taking your youngest kids on the rides, you're definitely going to want to visit Docking Bay Seven restaurant or the Milk Cafe. What kid isn't going to want to drink funny flavored blue milk? And it's dairy free, because the alien walrus creatures that Luke got his milk from are strangely expensive to import. They had to make do.

Also, they come in boozy varieties, so there's that.

The only thing is that for lots of these attractions, there's going to be an epic wait, which children, especially small ones, do not like. However, according to Disney, "Advance reservations for Droid Depot, Savi's Workshop − Handbuilt Lightsabers and Oga's Cantina are highly recommended and can be made up to 180 days in advance." If you can avoid waiting, do it. It should be noted that at least for right now, there is no FastPass accepted at Galaxy's Edge, so there will be waits for entrance on some attractions no matter what. It is included during Extra Magic Hours if you stay at one of their resorts, so you might want to plan on getting there early.

If you're planning your trip through Disney's My Disney Experience App, you can reserve your spots there. Prepare to wait, and may the force be with you (or at least the rum in your blue milk).

More Like This
Can Elderberry Help Prevent Illness In Kids? Doctors Weigh In
16 After-School Snacks For Hangry Kids
Tips For Apple Picking With Kids
Prince George Reportedly Got Sassy In A Fight With A Classmate