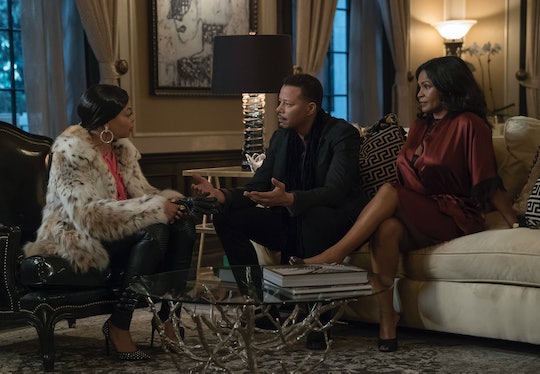 Lucious Could Be Playing Giuliana On 'Empire'

When we learned the story behind Lucious and Giuliana’s past, it was pretty much what most of us had expected. They were lovers until she double crossed him and then her husband at the time (the one she recently killed in cold blood, by the way) showed up to take Lucious’ money and left him broken hearted. It’s all in a day’s work on Empire though. But the important question here is, will Lucious betray Giuliana on Empire this time around as retribution for her past sins against him?

At first he seemed totally against the idea of letting her back into his life, but after she admitted to killing her husband for him (that motive feels like a bit of a stretch, but OK), he seemed to soften and accept her. He even threw the party for the Vegas gaming commissioner at Leviticus in order to solidify this newfound partnership that Giuliana had been working Andre for. Of course, this means that Andre's now out and Lucious is in, but is that because Lucious really does want to be with Giuliana or because he just wants to keep her close to take her down later?

Except for Anika, the women who’ve gotten between Cookie and Lucious over the years have eventually vanished, and the same goes for the men in Cookie’s life. Obviously the show is working hard at reminding fans that “Coocious” is still endgame, so chances are Giuliana isn’t here to stay. But while she is here, there’s likely going to be a lot more trouble she stirs up simply sliding into place as Lucious’ arm candy.

Let’s look at the facts here. Back in the day, while Cookie was still in prison but Lucious had already built up his brand, he fell for Giuliana and even wrote the song "Crazy Crazy 4 U" for her. By all accounts, they started a full-fledged romance. Then, he brought a duffle bag somehow filled with $10 million for a business arrangement and Giuliana’s husband showed up to not only take back his wife (who didn’t seem all that surprised by the deal gone awry), but also the money. In present day, it would appear that Lucious has forgiven Giuliana now, but for him, that forgiveness seemed to happen way too fast.

This has to be a long con, meant to eventually blow up in not only Giuliana’s face, but somehow Andre’s as well. Lucious is pretty much the worst overall, but he’s also smart and savvy enough to know when he’s being played and how to get a few steps ahead of his competition without them knowing it.

This time around, instead of Giuliana playing Lucious, it’s likely going to be Lucious playing her. Empire is all about the shock value and surprise twists, so having Lucious cozy up to her for a few episodes before finally taking her down is a pretty reliable formula.