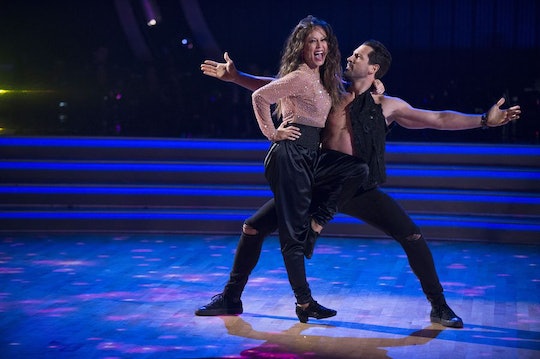 Sometimes, fans forget that between day-long rehearsals and then weekly live tapings for Dancing With the Stars, these pro dancers and contestants have their own lives outside of the competition show. So when Maks Chmerkovskiy was absent from the ballroom floor Monday night, it definitely caused some fans to wonder what was going on and ask, will Maks return to Dancing With the Stars?

The pro dancer took a night off from the show, but that doesn’t mean he won’t be back very soon to continue with partner Vanessa Lachey. In fact, he tweeted that he’s excited about getting back to the competition with his partner. But that hasn’t stopped the rumors of the pair allegedly not getting along behind the scenes, though the DWTS duo themselves haven’t confirmed any discord in their professional relationship. Romper has reached out to Lachey and Chmerkovskiy's reps for comment but have yet to hear back.

A source has reportedly told People that Chmerkovskiy and Lachey haven't been getting along off the dance floor. "There’s a big chemistry issue," the source said. "They both have big personalities and that’s not always the best recipe for a good partnership." The insider went on to claim that "They’ve been fighting a lot." But since neither Lachey or Chmerkovskiy have confirmed this alleged feud to be true, it’s plenty possible that Chmerkovskiy’s absence from Monday’s episode of DWTS really wasn't due to as much drama as it seems.

Because of the grueling hours and amount of hard work that goes into learning new dance routines on DWTS each week with a partner some of these contestants barely know, it’s easy to forget that sometimes these pairs are spending up to 12 hours a day with each other. And if there is any truth to the disagreements among Lachey and Chmerkovskiy, that’s only to be expected. When you spend that much time with anyone, you’re bound to have disagreements, so the claims of any rumored drama between Lachey and Chmerkovskiy could stem from normal stress any pair would have while competing on DWTS.

Since Chmerkovskiy wrote in two separate tweets on Wednesday how much he looks forward to getting back to DWTS next week, he’s more than likely going to return for the next round of dances and in time to start back up with Lachey as his partner. And so far, Lachey herself has had only positive things to say about being partnered with Chmerkovskiy on DWTS. "He's trained me and taught me so many amazing wonderful new things just like any trainer would or teacher would," Lachey told Us Weekly on Tuesday, contrary to the rumors that the pair have allegedly been fighting on DWTS.

Recently, a source also told Us Weekly that Lachey and Chmerkovskiy have been butting heads as a pair on DWTS more often than not, citing their similar personalities as the reason behind their alleged drama. "Their personalities are very similar so they disagree about everything. They refuse to give into one another," the source claimed. "They’re playing nice for the cameras but both are miserable paired with each other."

As anyone with a big personality who spends the entire day with someone who is the same way will tell you, arguing or being met with similar stubbornness is completely normal, if that happens to be the case with Lachey and Chmerkovskiy. But either way, it’s safe to say that Chmerkovskiy will be returning to DWTS to continue to train and dance with Lachey, as expected.

Lachey posted a screenshot on Instagram from Monday’s episode of DWTS, commending Alan Bersten for stepping in to take Chmerkovskiy’s place for the night, but also captioning that she’s excited to dance with her original partner once again. "I can't WAIT to get started tomorrow with @maksimc on week 4! We're cookin up something special for you!" the DWTS contestant wrote. Given that he’s has also expressed his excitement at returning to the ballroom floor with Lachey, fans can take comfort in knowing that Chmerkovskiy will return to DWTS, despite any possible friction that may be going on behind the scenes.