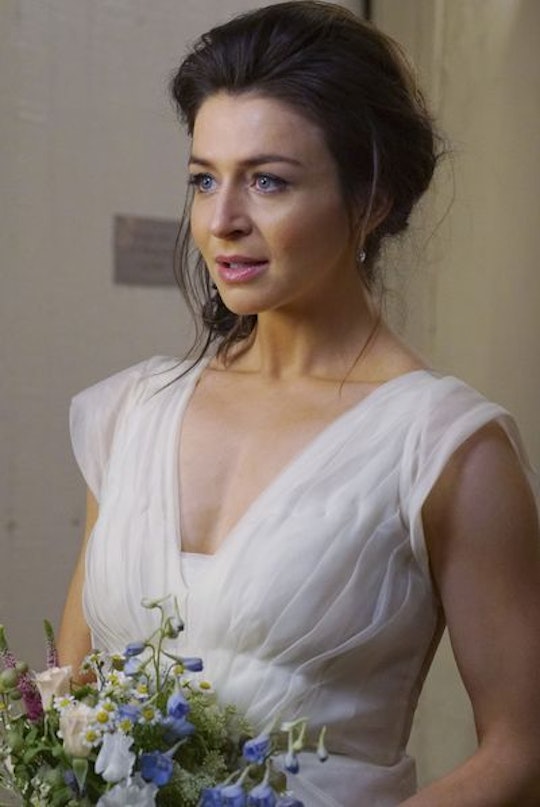 Will Owen & Amelia Actually Get Married On 'Grey's Anatomy'? There Has To Be A Happy End

If there are any Private Practice fans out there still bopping around, then they're likely collectively biting their nails right now, hoping that Amelia gets the sort of happy ending her character has long deserved. But since Shonda Rhimes loves to hurt us, you can't help but wonder, will Owen and Amelia actually get married on the Grey's Anatomy season finale or not? Because if Grey's weddings have taught viewers anything, it's that nothing is simple when it comes to the big day of nuptials. And judging by the sneak peek of the season finale of Grey's Anatomy, Amelia is definitely going to be having some cold feet on the actual day, prompting April to fetch Owen to come there and talk her off the ledge. Through the bathroom door. Because, Grey's, duh.

The promo of the Season 12 finale shows Owen at the bathroom door, behind which Amelia is apparently holed up, refusing to talk to or see anyone. It's unclear from the scene what the immediate issue is, but since the episode is called "Family Affair", and judging by Owen's mini speech through the door, it's likely got something to do with her family refusing to come to the wedding. Ouch.

"It doesn't matter. If they don't want to be here, then they shouldn't be. We don't want them. They don't get it, and they don't have to. I do, and I'll be there. And the only one I want there is you."

All together now — awwww. But then again, at this point, we expect nothing less of Hunt and his all around good guy-ness. So the issue is likely that Amelia's family just doesn't approve of their sudden engagement and subsequent wedding, leading her to question it herself. Because how could there possibly be a Grey's Anatomy wedding without worrying the fans and scaring us into submission?

In past Grey's Anatomy finale weddings (why are there so many?), there have been other instances of cold feet and breakups. Need we even mention Cristina getting left at the altar by Burke, or April realizing at the literal last minute that she didn't want to marry that sweet paramedic who had been long forgotten? Matthew? Anyway, the point is, there's no way they can pull another one of those tragedies on us. Especially since it's way past the time for both Amelia and Owen to have some happiness. Hasn't there been enough heartache and awfulness floating around Grey Sloan Memorial Hospital?

So, will Owen and Amelia actually get married? All signs of hopefulness and faith on Shonda being nice this time around point to yes, after a few hiccups that the promos wanted to throw our way. Let's just hope no one gets talked out of it.