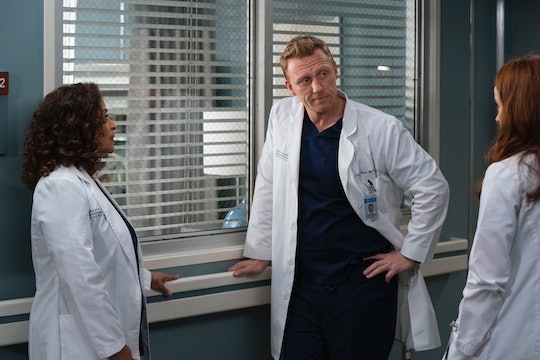 Owen's Life Could Be In Danger On 'Grey's Anatomy'

The penultimate episode of Grey’s Anatomy Season 15 had everything you’d expect from the second to last episode of a season. There was a declaration of love, potential legal trouble for a successful surgeon, and an accident that left some main characters’ lives in danger. It’s all in a day’s work on this show, but Owen was in the car accident that could have dire consequences. Fans are going to be concerned about if Owen survives the crash on Grey’s Anatomy and I honestly can’t blame them.

As soon as the car was enveloped in a cloud of fog, I could see the accident coming for them. And when the cars began hitting Owen’s limo from seemingly every angle, it went from bad to worse. Unbeknownst to Owen, he needs to get to the hospital as soon as possible for the birth of his daughter, which he hasn't even found out about yet. And the only blood donor in the world who can save Alex’s pediatric patient needs to get there in one piece herself. The car crash couldn't have had worse timing, but this is Grey’s Anatomy, after all. Is there really such a thing as good timing on this show?

I am going to go out on a limb and say that Owen will survive the car crash, if only because he is far too important of a character to die. I know Grey’s Anatomy is known for pulling at the heartstrings hard and making viewers ugly cry every Thursday night, but I don't think Owen’s death is on the horizon. I do, however, think that he is in grave danger and this possible multi-car pileup is going to make it difficult for him to get to the hospital with the blood donor and in time for the birth of his daughter.

We can't forget, though, that Owen is a trauma surgeon. As he reminded the blood donor, he served multiple tours in Iraq and he has been around intense and stressful situations enough to be able to handle himself. There is no reason he won't be able to save the day when the fog clears and he needs to get himself, the donor, and Schmidt to the hospital. It’s just a matter of how long it will take him and if he will be too late for the patient and for the birth.

As if Owen’s life wasn't stressful enough with love triangles, a foster child he co-parents with his ex-wife, and the recent therapy realization that he is in love with *someone*, now Owen has the added pressure of surviving this car accident on Grey’s Anatomy so he can save the day in more ways than one. If there was ever a time to kill of a major character and totally shock fans, though, it would be now. Owen has everything going for him if he can make it to the hospital in time to tell Teddy how he feels, hear her tell him that she loves him, and have a baby with her. It would be true Grey’s Anatomy heartbreak to see them lose it all in the blink of an eye.

Still, I don't see Owen leaving the show right now. He sort of slid into the head male surgeon role that Derek left behind in his own death. Like Bailey and Richard, Owen has become a staple at Grey Sloan Memorial Hospital. I can’t see how the show would deal with his absence and it’s about time a couple got a happy ending to their love story. If Owen dies in the crash in the Grey’s Anatomy season finale, it will be extremely hard for not only fans, but the other characters to come back from that. If the finale has to deal with loss, then so be it, but I think we are overdue for someone getting a happy ending and Teddy and Owen may be the couple to get it.