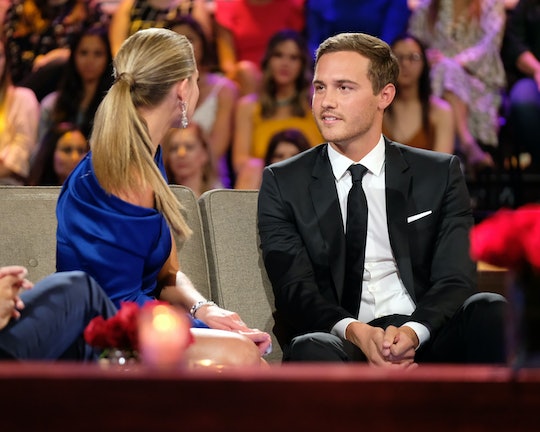 There is no denying that Peter was a fan favorite on Hannah's season of The Bachelorette. And because he made it to the final three, fans got to watch his journey for the entire season until Hannah broke things off with him to narrow things down to her final two, which seemed to be hard enough for her. Now, fans might be wondering if Peter will be on Bachelor in Paradise so the pilot can spread his wings and fly into a new relationship. While I would love to see Peter get his own chance at finding love sooner rather than later, he might have his sights set on something a little bigger.

Almost as soon as Hannah sent Peter home on The Bachelorette finale special, viewers were rooting for him to become the next Bachelor. Unfortunately for Peter, he has some competition in the form of both Tyler and Mike from Hannah's season, but he could be more determined to be the Bachelor rather than appear on this season of Bachelor in Paradise. He's also not on the official Season 6 cast list. So unless he is supposed to be a surprise contestant who shows up near the end of the season, I don't think Peter will be on BiP this time around.

Peter's likely absence on BiP this season could have something to do with being legitimately groomed as a potential frontrunner for The Bachelor, which will start filming this fall. While no one affiliated with the franchise has come out and admitted that Peter is in talks to be the next lead, he certainly got his Bachelor edit toward the end of the season.

Chris Harrison refrained from bringing up Peter's ex-girlfriend during "After the Final Rose", who he was rumored to have dated up until he was cast for Hannah's season of The Bachelorette. And after the special aired, ABC executive Rob Mills told Entertainment Tonight it was so Peter could get proper closure with Hannah before moving on.

"It sort of took away from this is a guy who still has some serious feelings for Hannah and wanted to talk about that and get that closure," Mills said, of Peter not talking about his ex.

Peter himself recently told People he "wouldn't say no" to being on The Bachelor next season and having his turn to find love and give out roses to his own cast of contestants. As much as some fans might want it and as much as Peter might be ready to embrace more Bachelor Nation fame, there still hasn't been an announcement either way. Because of that, never say never about Peter being a last minute BiP recruit.

It's not uncommon for Bachelor and Bachelorette runner-ups to give love a second chance on BiP regardless of how far they made it on either of the other Bachelor Nation shows. Kendall Long, who came in third place on Arie's season of The Bachelor, went on BiP Season 5 and ended up falling for Grocery Store Joe. Now, they are basically Bachelor Nation's sweethearts.

Colton, who made it to the final four on Becca's season of The Bachelorette, went on to appear on BiP directly following the season. And Hannah Godwin, who was one of Colton's runner-ups, will be on this season of BiP. So while some fans might still be rooting for Peter to take the reins as the next Bachelor, it is entirely possible that he will be on BiP Season 6. Either way, I think fans will be happy to see Peter back on TV regardless of which show he is a part of next.