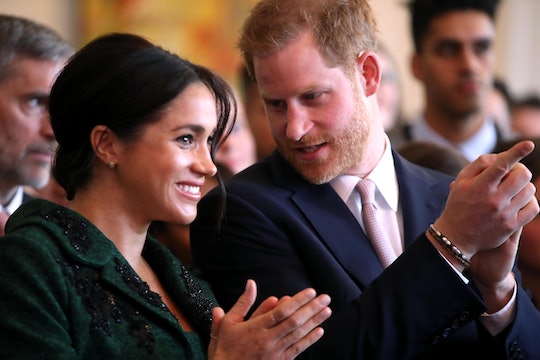 Prince Harry Will Reportedly Take Paternity Leave, But Not For Very Long

Prince Harry is about to become a dad for the first time after spending the past five years as an uncle. Much like his mother Princess Diana before him, Prince Harry has always been a very hands-on kind of guy with kids. He just seems to be able to relate to little ones so naturally, which obviously means he must be excited to have his own baby on the way. In fact, he and his wife Meghan Markle seem rather quietly determined to be modern parents, which begs the question —  Will Prince Harry take paternity leave? Because it certainly seems like something he would be interested in doing, doesn't it?

In the United Kingdom, fathers can take two weeks of paternity leave, according to Dad Info. While this might not seem like much, it offers parents the opportunity to spend those crucial first few weeks together with their baby. Figuring out a nice routine that will hopefully benefit all involved, finding a balanced way to share the parenting responsibilities and work together.

Indeed, it should be a nice time for parents, and it seems Prince Harry agrees. Because The Daily Express that Prince Harry is planning to take paternity leave once their baby arrives, which is a great idea the royal family seems to be embracing in recent years.

A friend of Prince Harry's reportedly told the news outlet that the Duke of Sussex plans to take a little time off from royal duties when his wife gives birth within the next month or so. "He doesn't need to take paternity leave because he doesn't work in the way most people do, but he thinks it's a very modern dad thing to do," the friend reportedly said, according to The Daily Express.

Of course, Prince Harry's paternity leave wouldn't be a paid leave because his work with the royal family is actually unpaid, according to The Independent; his role is funded in part by his grandmother Queen Elizabeth and his father Prince Charles. But it seems the Queen at least is fine with him taking a little time off. A Buckingham Palace aide reportedly told The Daily Express, "I'm sure Her Majesty will accommodate a break from duties."

Prince William took paternity leave when his wife Kate Middleton gave birth to Prince George in 2013 and Princess Charlotte in 2015, so it's not exactly unprecedented for a royal dad to take time off after welcoming a new baby.

But when his youngest son Prince Louis was born in April 2018, Prince William was back to his royal duties the day after his birth, reportedly to make up for other royals who had to scale back their duties at the time, according to Hello! Magazine. Clearly it wasn't a great idea, because, as TIME reported, Prince William rather famously fell asleep during Anzac Day services just three days after becoming a father for the third time.

No wonder Queen Elizabeth reportedly supports her grandson taking a little paternity leave. She can't have people sleeping on the job now, can she? Plus, Meghan Markle is going to be a first time mom and I'm sure the couple will appreciate that time together.

It's nice to see the royal family modernizing, even if it's just a little bit at a time.