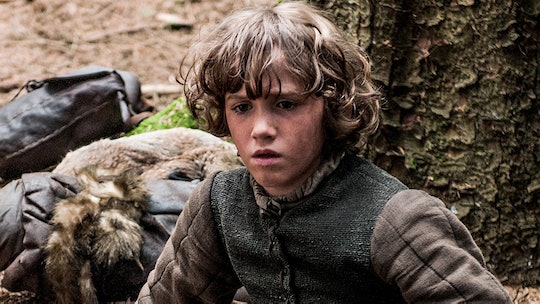 Will Ramsay & Rickon Meet On 'Game Of Thrones'? This Could Be The Gift From The Umbers

There are few things more annoying than plot holes or plots totally forgotten on shows like Game of Thrones. We've come to expect a certain level of dedication when it comes to the characters we've come to know, love, and even hate. Which brings us to Ramsay Bolton and the gift the Northern Umbers promise him in the preview for Episode 3 of Game of Thrones this season. So what gift do they have for him? And will Ramsay meet Rickon in Season 6 of Game of Thrones? All signs currently point to the forgotten youngest Stark child.

The last time we saw his mop of dirty blonde curls (since he's somehow the Stark child who looks most like Ned), it was Season 3 and Rickon was leaving under Bran's instructions, to leave with Osha the wildling and head for the Umbers, who would surely protect him, right? Right?

But the thing is, they are suddenly very much present in the preview for Episode 3 of Season 6, appearing in Winterfell to help the new Lord Ramsay with his current problem of having lost everyone closest to him. At least, that's what I hope their presence is all about. And yeah, I know — it's his own fault that he is now without family, friends, and human pets. But I can think of no other gift that would suit the story of Ramsay securing his hold on Winterfell than to have one of the Stark heirs returning to be used as his bargaining chip once Jon Snow makes his way there. Because you know he will.

And since Rickon's return is imminent, since he's one of the only living Stark heirs still around, his reintroduction in Episode 3 makes total sense. As Maisie Williams said about the return of Arya's long forgotten younger brother Rickon in a Radio 1 interview:

"Yes, we will [hear from Rickon] indeed... Oh no, I’m literally going to get off the air and someone’s going to e-mail me!"

The kind of important thing that no doubt gnaws at the back of your mind, though, after considering Rickon to be the "gift" that the Umbers bring to Ramsay is if it will be a similar Theon torture plaything situation or not. Knowing Ramsay, that isn't too far out of the spectrum of possibilities, but we really don't need to rehash that whole sad transformation of Theon into the pitiful Reek, this time with Rickon Stark.

Speaking of Theon, it isn't totally out there to think that he may actually be what/who the Umbers have brought to Ramsay Bolton. The last we saw in Episode 2, Theon told Sansa that he had to leave her to "go home." Now, we expect this to mean that he's finally going to return to his rightful home in the Iron Islands and finally be somewhat normal. But, who's to say that he didn't decide on his own to sneak up upon Winterfell (which was, in fact, his home for most of his life) and attack his former captor, only to be "gotten" by the Umbers? Or, he could have easily been snatched up on his way back to his birth home, unbeknownst to Sansa and her new crew.

Basically, no matter what gift the Umbers have for Ramsay, it's bound to be something more than flowers and chocolates. To satisfy the Lord, his "gift" is going to be either a helpless Northerner like Rickon Stark to keep prisoner again (those cold Winter nights get lonely), or a batch of animals to torture. Nothing good will come from it, that's for sure.