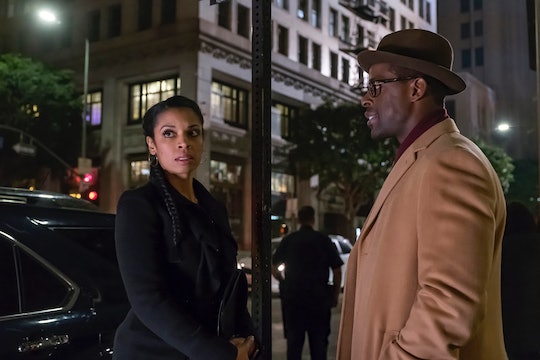 'This Is Us' May Introduce A New 'Big Three"

The Season 1 finale of This Is Us left a lot of fans wondering where the lives of each member of the Pearson family is headed. Kate decided that she wants to sing like her mom once did, Kevin took off for a Ron Howard movie audition, and Randall suddenly decided that he wanted to add another member to his family. But will Randall and Beth adopt a kid on This Is Us? Season 2 will definitely explore the process and, according to Sterling K. Brown (who plays Randall), the topic of adoption will come up early on in the upcoming season.

Brown told Entertainment Weekly that coming into Season 2 of This Is Us, revisiting the topic of adoption for Randall and Beth will be as big of a deal as it sounds like and that it will be “something that’s going to be explored right from the beginning.” But will the couple be able to adopt and how will this sudden baby fever and urge to follow in his adoptive parents’ footsteps affect Randall’s marriage with Beth?

Earlier in the season, Beth and Randall had a pregnancy scare that had them searching for a pregnancy test in the city on what was supposed to be their romantic night away. When the test was negative, they were both relieved and happy, but now that Randall has suddenly changed his mind, it’s going to be up to Beth to decide what she wants.

Brown also told Entertainment Weekly, “I believe that Randall and Beth talk about everything [but] our show begins with him doing something where he doesn’t announce to Beth that he’s actually going to be bringing his biological father home.” So now that he’s also dropped this huge, child-sized bomb on Beth that he wants to adopt (after they both seemed to mutually agree that a third baby was unnecessary), it’s probably not going to be an easy road to adoption.

But in another way, Randall and Beth adopting a kid on This Is Us would bring things full circle in a beautiful way. They already have two girls, so bringing a third adopted child would give them the same “big three” Randall grew up with. Even though “The Game Plan” episode earlier in the season was about how much Beth and Randall didn’t want another kid, maybe it was just foreshadowing that they’ll have another one, but in a different way. Honestly, the only thing that could bring more tears is if it’s a baby boy and they name him William or Jack.