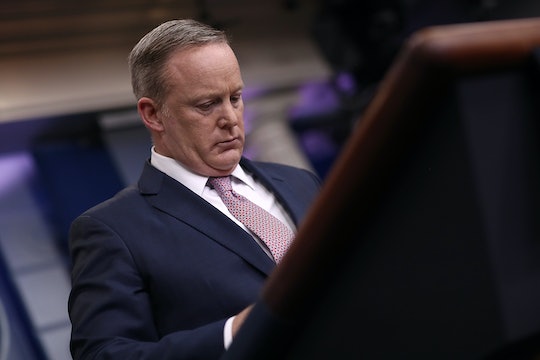 Is Sean Spicer On His Way Out?

Almost since the moment he assumed responsibilities in his grueling role as President Donald Trump's White House press secretary, Sean Spicer has cemented himself as hostile to the press, a national punchline, and a prolific generator of gaffes and unfortunate missteps on the world stage. But he was conspicuously absent during one of the most consequential weeks of his boss's presidency after Trump unexpectedly toppled established norms by firing FBI Director James Comey Tuesday. The White House has told the press that the embattled press secretary was away on Navy Reserve duty, but his absence from the briefing room only strengthened the shrill of rumors that Spicer will be replaced.

Spicer's hold on his job has seemed tenuous from the get-go, when he entered the national consciousness back in January desperately trying to defend Trump's wildly hyperbolic claims about the crowd size at his inauguration ceremony. Fast forward a few months, and Spicer reportedly had a "meltdown" when he learned the news of the Comey firing, according to Newsweek — key information that Trump reportedly opted not to share with him or his staff until the last minute out of fear of leaks to the press.

That alone seems like a surefire sign that Trump is less than pleased with Spicer's performance. But in an interview with Jeanine Pirro of Fox News Friday, Trump offered a defense of Spicer: "He's doing a good job, but he gets beat up," the president said.

Still, The New York Times reported that same day that the president was unhappy with the performance of several of his key staff members and was considering a major overhaul of personnel within his administration. Specifically, the outlet reported, Trump was feeling "dissatisfied" with Spicer, as well as chief of staff Reince Preibus and communications director Michael Dubke. And Axios reported Sunday that Trump's controversial chief strategist Steve Bannon was also on the list.

According to The New York Times, Trump has floated the possibility of replacing Spicer with Fox News host Kimberly Guilfoyle. But much of the speculation around who may take over for him if he gets the boot has centered around Deputy Press Secretary Sarah Huckabee Sanders, who filled in for him last week while he was away. Saturday Night Live effectively encapsulated this sentiment during a skit featuring comedian Melissa McCarthy in her recurring role parodying Spicer, when a reporter asked her "If [Trump is] your friend, why is everyone saying he's about to fire you and replace you with Sarah?"

"I need to find Trump! I promise I'll talk better," McCarthy's Spicer answers before embarking on a journey that includes her traveling through Manhattan on a rolling podium to appeal to Trump.

And according to a February Politico report, even McCarthy's depiction of Spicer could be helping to put him on thin ice, as the president reportedly does not appreciate that fact that a woman is playing him. Other standout Spicer moments also could be contributing to his publicly perceived unstable status in the White House. For example, he recently drew criticism when he somewhat inexplicably said that even Adolf Hitler didn't use chemical weapons on his own people (he did) and repeatedly bungled the apology. Memorably, he got combative with reporter April Ryan at a daily press briefing as well.

Considering the stressful nature of Spicer's job and the rumors swirling about whether he will be able to hang on to it, the question becomes: Does he even really want the role anymore?