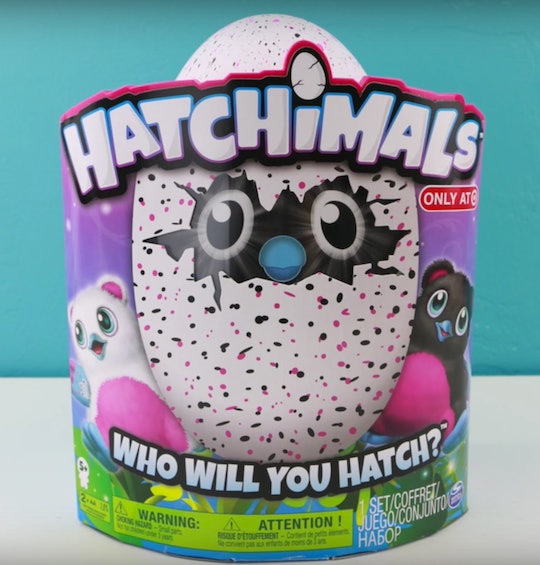 These Stores Are Restocking Hatchimals ASAP

Toymaker company Spin Master thought that they had created the "toy of the year" when they released the insanely popular Hatchimals line. What they didn't know, as CEO Anton Rabie recently told TIME, was that the cute characters that hatch from an egg and learn to play games and sing as they grow up would morph into an absolute "phenomenon." One that's making parents of the 5 and up crowd a little crazy, because the shelves of toy stores all across the country that once housed them have been empty for weeks. So, the clock is ticking. Those with little ones are anxious to know whether stores will get more Hatchimals before Christmas — and the brutal truth is that they'll still be tough to snag throughout the holiday season.

But there is still hope, although the scarcity will be very real through the holiday season. The official Hatchimals website contains a disclaimer that it does not support unauthorized selling and inflated pricing of the product and is working to get more of them on the shelves; resellers have been upselling the originally $59.99 toys at unthinkable rates. "While additional product will hit retail shelves in December, we anticipate this inventory will also sell out quickly," it reads. "We have increased production and a whole new batch of Hatchimals will be ready to hatch in early 2017."

So, assuming kids are still as enthralled by these interactive "pets" as they have been pre-Christmas, chances are that those adults who want to get them the hottest gift of the season will be able to do so not long after the New Year. But those who really, really want to get the Hatchimal under the tree on Sunday, and enjoy its half-hour-long hatching process over Christmas brunch? Options are a little more constricted.

First, CNBC reported that any member of the Toys "R" Us rewards program who shops at the toy store through Dec. 22 (so, get there now) will be entered into a lottery for the elusive opportunity to win one of the coveted sensations. Likewise, Walmart will be restocking its Hatchimals supplies throughout the holiday season, as will Target. It's imperative to hustle to get to these retailers, because there is, of course, no guarantee of snatching a Hatchimal, and lots of competition.

For those who need to get that Hatchimal wrapped and ready to go in the next few days, online shopping is unlikely to be the best bet. On Amazon, for example, the "Penguala" species of Hatchimal is selling at majorly inflated prices, with the cheapest on Thursday going for $144.99, and the most expensive for a whopping $269.99. And it's not worth shelling out, because these won't be delivered until the tail-end of December or early January, anyhow.

In the meantime, and to keep the magic alive, Hatchimals has launched a "North Pole" section on its website, which features a short video explaining that "it takes time for these magical creatures to grow." There's also a Hatchimal name generator, a quiz, a "tips and tricks" video, coloring activities, and other Hatchimals information to sustain kids during the wait.

Whether kids retain their interest post-holidays will be up in the air.