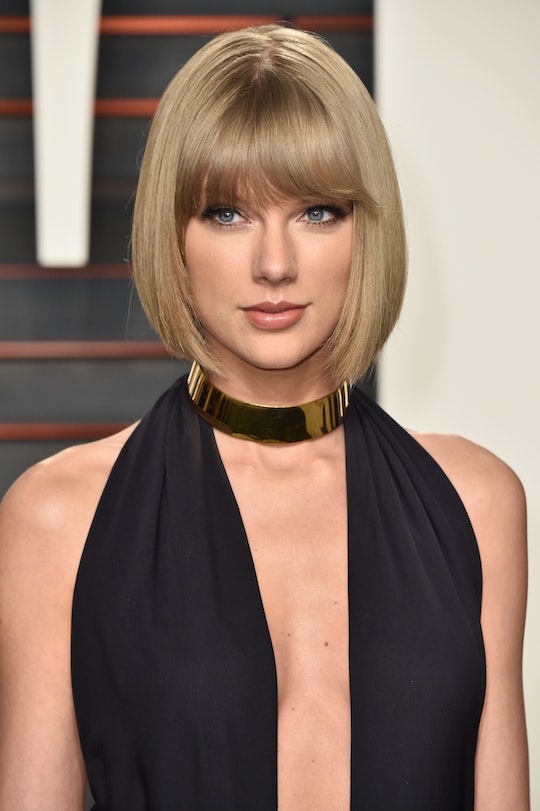 Taylor Swift Has A Good Reason To Attend The 2017 CMAs

It might be several years (and seem like forever) since Taylor Swift premiered "Teardrops on My Guitar" and became a total pop-country singing sensation, but that doesn’t mean she’s totally left behind the roots of her music. In fact, she’s even on the nomination list for the CMA Awards this year. So will Taylor Swift attend the 2017 CMAs? The singer appeared at the awards show in 2016 when she presented the award for Entertainer of the Year, so it’s not totally inconceivable that she’d make another appearance this year, especially since she’s been nominated for her first CMA Award in three years, believe it or not.

In addition to big nominees like Florida Georgia Line, Lady Antebellum, and Miranda Lambert, Swift has been nominated for writing Little Big Town’s hit single "Better Man." And if she made an appearance at the 2016 CMAs as a presenter, it’s entirely possible that the singer will be in attendance to not only support her fellow artists, but also in case she walks home with the award for Song of the Year.

Unsurprisingly, though, there hasn’t been much from Swift about officially attending the 2017 CMAs, but that’s likely because she has her sixth album Reputation set to be released on Nov. 10. But because of her newest album’s upcoming release, that’s just another reason why Swift could and probably should attend the 2017 CMAs.

The last time Swift was nominated at the CMAs was in 2014 when she was up for the award of Female Vocalist of the Year. Before that, she last took home an award for Musical Event of the Year and Music Video of the Year for her song "Highway Don't Care" with Tim McGraw and Keith Urban in 2013. And before 2014, Swift was consistently nominated for different CMAs each year, but the 2017 award for Song of the Year is her first CMAs nomination in three years, so it’s kind of a big deal.

Throughout Swift’s career, she’s managed to take home 11 wins and 26 different nominations at various CMAs shows before she officially crossed over from country singer to strictly pop star — though judging by the fact that she seemed happy to return to the 2016 CMAs to present an award, there’s little reason why she wouldn’t come back to the 2017 CMAs in the hopes of accepting her first CMAs award in years.

Swift has been admittedly busy the past week, what with officially announcing on Instagram the track listing for Reputation. But as we all know, country music is where it all began for the Grammy award-winning singer, so it would make the most sense for Swift to be in attendance if she can. And heck, if she felt like getting up on stage and performing one of her new singles, I certainly wouldn't stop her.

In the meantime, I expect Swift’s millions of fans to be counting down the days, hours, and minutes, to the much-anticipated release of her new album which has already been given some pretty epic music videos. They might not sound much like the singles from some of her early country albums, but even the most diehard fans are still all about that Swift life.

The 2017 CMAs will air on ABC on Nov. 8 at 8 p.m. EST and whether or not Swift attends the show, her nomination for writing Little Big Town’s single shows that she’s still all about her country roots.