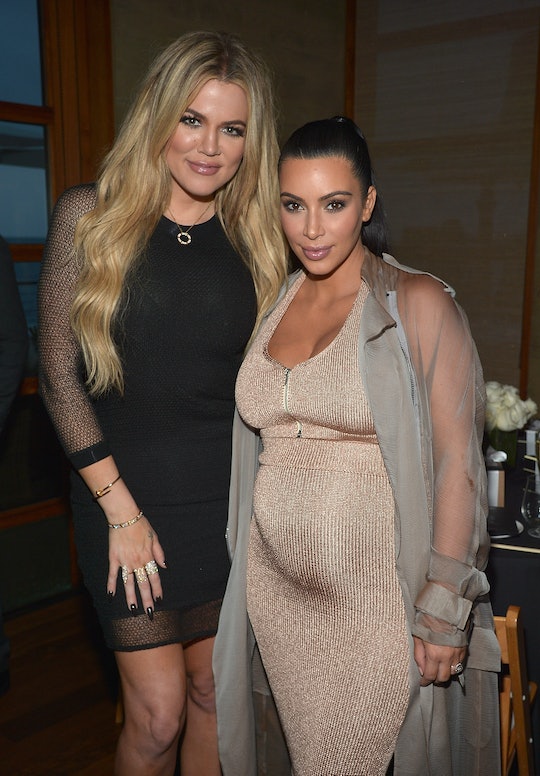 Could The Kardashians Give Birth At The Same Time? Things Could Get Really ~*Wild*~

If you're a fan of the Kardashians, it's likely you haven't been able to keep up with the family's recent stream of baby news. In September, reports surfaced that Kylie Jenner and Khloe Kardashian are supposedly pregnant, and on Sept. 28, Kim Kardashian finally confirmed her surrogacy news on a teaser for the upcoming season Keeping Up With The Kardashians. If the pregnancy reports about Khloe and Kylie are in fact true, then that means that three Kardashian sisters are pregnant at this very moment. So, will the Kardashians give birth at the same time?

Now that Kim has officially confirmed that she's expecting her third child via a surrogate, it's a bit easier to determine when Kim and Kanye West will welcome their next little one. In the Season 14 premiere of Keeping Up With The Kardashians, Kim announced the baby news while on the phone with Khloé Kardashian. The premiere episode also touched on Kendall Jenner's Pepsi ad scandal and the that controversy erupted in April. Furthermore, the teaser for this Sunday's episode follows Kourtney Kardashian's 38th birthday party in Mexico, which also took place in April. Based on these timing clues, it's likely that Kim's surrogate became pregnant sometime in April. Given the April timeline, Kim's surrogate should give birth in January 2018, a theory that's backed up by multiple reports. TMZ first reported that Kim and West's third baby is due at the "end of January."

As for Jenner, who has yet to confirm she's pregnant, there's a strong possibility she will also give birth in late January (if she is pregnant). According to a Sept. 26 report from TMZ, Jenner is supposedly five months pregnant with Travis Scott's baby girl. If this claim is true, then Jenner will give birth around the same time as Kim's surrogate. Romper has reached out to Jenner and Scott's representatives for comment about the reported pregnancy.

According to another report from People, however, Jenner is allegedly due in February, which would mean she conceived sometime in May. This due date would make a little more sense because they were first reported to be hanging out in mid-April, just a few weeks after Jenner split from her former boyfriend, Tyga.

OK, now moving on to Khloe. According to Us Weekly, Khloe is due sometime in February. If this claim is correct, then Khloe and Kylie might give birth around the same time. Romper has reached out to Khloe about the rumored pregnancy.

Khloe and Kylie are both due around the same time. They are approximately four months along.

Live footage of a fan trying to get to the bottom of the Kardashian due dates:

As for how the Kardashian sisters feel about being pregnant at the same time, a source reportedly close to Kim told People that she's excited about the baby boom. The source went on to claim that Kim hopes the "next generation of their family is as tight-knit as they are," which is a really sweet sentiment.

Whether you're a fan of the Kardashians or not, you have to admit that this is an exciting and happy time for the family. It's wonderful that the Kardashians have the opportunity to raise their kids together, and one can only hope that all three pregnancies go smoothly.