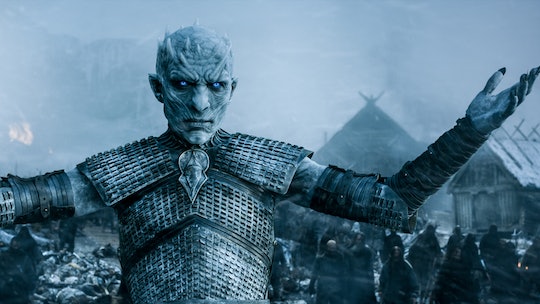 Will The Night King Come After Bran On ‘Game Of Thrones’? The Three Eyed Raven Thinks So

Until now, Season 6 of Game of Thrones has been making fans pretty much giddy with all of Bran's flashback visions. In Sunday's episode, though, there were notably less Ned Stark flashbacks and far more information on the White Walkers and the Night's King. But now that he touched Bran (whaaat?), will the Night King come after Bran on Game of Thrones? He already came after Bran once in Sunday's episode, him and his thousand White Walker army, so obviously the Stark kid is currently at the top of his hit list.

But after everyone's favorite protector, Hodor, did his damnedest to protect Bran to get him safely away from the White Walkers, the question now is whether or not the Night King is going to come after Bran again — and if that's the case, there will be no one to slow him down if Hodor is, in fact, dead. Need a few moments of silence? I thought so. (TBH, I need them too.) Anyway, if Bran is going to escape the wrath of the White Walkers and the Night's King himself, he's probably got to make his way back the Wall and back over to the side where there are a lot less White Walkers. He'll be safe from the perils lying beyond the Wall, and he'll just have the evils of the human kind to deal with. No big, right?

It might be kind of hard without Hodor there to carry him, but that's beside the point. If the Night's King is after Bran, nothing is going to be able to stop him. But why does he want Bran so badly? Our money is on the fact that Bran is likely the Three-Eyed Raven now. He can see into the past and, possibly, the future. If he does become the Three-Eyed Raven, he may eventually be able to see what the White Walkers are up to and their general plan (do they, like, go over maps and plans of attack like Jon Snow and company?).

Unfortunately, being the rebel that Bran Stark is, he just had to play with fire — er, ice — and get up close and much too personal with the Night's King. The king touched Bran's arm, effectively marking him and undoing whatever protection the Three-Eyed Raven had over him. And so began the Night's King's journey to the caves to pretty much destroy Bran and everyone protecting him, including the Three-Eyed Raven.

If the Night's King is after Bran on Game of Thrones, the next possible place for Bran to seek help would be inside Castle Black, where literally everyone is gearing up to fight the White Walkers whenever they finally make their entrance. And at this point, you can't help but wonder if Bran will be the one responsible for them finally making it over the wall.