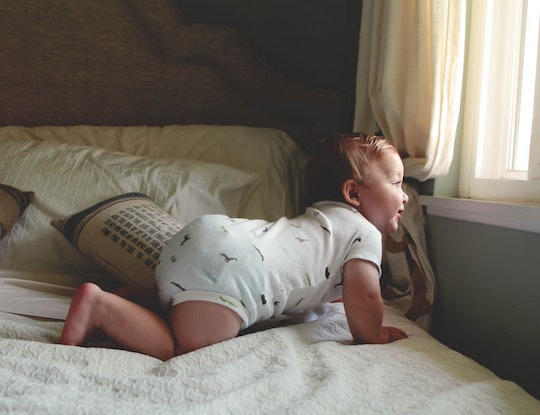 The Summer Solstice Might Not Destroy Your Baby's Sleep Schedule

New parents spend a good portion of their waking hours worrying about sleep — their baby's sleep, that is. When will they sleep through the night? Are they napping too much during the day... or not enough? But at this time of year, a new seasonal worry gets added to the mix: Does the summer solstice affect a baby's sleep habits? Do those longer days also mean longer hours of moms and dads pacing the floor, becoming more zombie-like by the minute?

Get that sigh of relief ready: Depending on your baby's age, the solstice may not wreak havoc with their snoozing after all. "Longer daylight hours during the summer tend to shift bedtime later in toddlers, but not as much in babies," says Nicole Johnson, president and lead sleep consultant of The Baby Sleep Site, an infant and child sleep consulting service. "It's unclear at what age that changes, but in my 10-plus years of experience, it begins to appear around 18 months old."

As the National Sleep Foundation explained, our sleep time and quality are largely dependent on our production of melatonin, a hormone produced by the brain's pineal gland. The gland is triggered by darkness, which is why we start yawning and getting drowsy not long after the sun goes down. But between June 20 and 22, the Northern Hemisphere is positioned to receive the most sunlight it will get all year. This marks the start of summer's long, lazy days when the sun doesn't set until well past 8:00 PM. With our melatonin production delayed, both adults and children feel more alert for longer stretches.

For babies, it's a little different. Newborns' brains don't begin to produce melatonin until around the 3-month mark, according to WebMD, so they're not yet wired to respond to sunlight cues. In fact, explained What to Expect, it's very common for young infants to follow odd sleep patterns, napping for long stretches most of the day and then staying awake at night. (That's one of the reasons why those early weeks are so tough on parents' stamina and sanity.)

Once infants are a little older and have settled into a more regular sleep cycle, they're more likely to be affected by the extended daylight time, says Johnson. So it's quite possible that your baby may fall asleep later in the evening, or wake up when the first rays of dawn peep in. However, "generally speaking, the good news is that daytime naps are either not affected, or get a bit longer due to the lack of total nighttime sleep," Johnson says. With that in mind, you can plan your summer days accordingly. You may find you can get more done around the house or take your drowsy baby on longer errands... or you could take advantage of the opportunity to grab a nap yourself on a lazy summer afternoon.

For parents hoping to have some time to themselves in the evening while the sun is still out, there are tricks you can use to keep your baby on their regular sleep schedule during the summer and beyond.

The most effective thing you can do, says Johnson, is to create a dark sleeping environment, which will help prompt the release of melatonin. At least an hour before your baby's bedtime, lower the lights in the house. Hang heavy drapes or blackout curtains in the nursery bedroom to block out that lingering sunlight.

Following a soothing bedtime routine will also lull your little one into sleep mode even in the brightest summer evenings. A warm pre-bed bath, followed by a rub with scented lotion, is a relaxing ritual. A bedtime story and/or a lullaby will add to the calming atmosphere. Put your baby into the crib when they're drowsy, but not yet fully asleep; this helps them soothe themselves to slumber. A white noise machine, like the Hatch Baby Rest, helps drown out background sounds and promotes sleep, according to the National Sleep Foundation.

One other option, suggests Johnson, is to go with the flow and set a later bedtime, perhaps 30 to 60 minutes later than you'd normally put your baby to bed. This means that you'll have to go back to your usual time once autumn's shorter daylight hours set in, but for some parents, it's the best option.

Whichever methods you try, you should be able to get your baby to adjust to the new sleep routine within a few days, as long as you're consistent. Then you and your partner can focus on getting a little extra shut-eye of your own.

More Like This
New Infant Safe Sleep Guidelines From The AAP Discourage Bed-Sharing
Should You Swaddle Your Baby In The Summer? Here’s How To Dress Them
21 Earthy Baby Girl Names For Your Little Force Of Nature
20 Perfectly Proper Tudor Baby Names