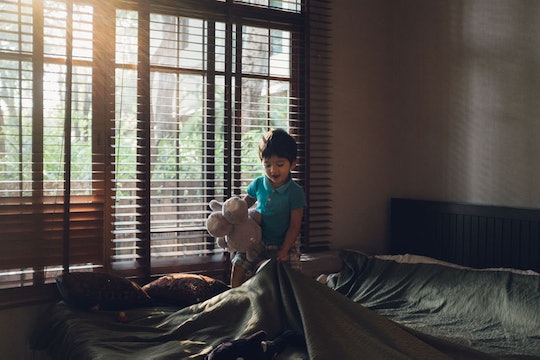 Most of us look forward to the midpoint of the year, when the weather warms up and the sun sets later in the day. But for parents, that time of year can seem more like a curse than a blessing, especially in the evening. The summer solstice can wreck your toddler's sleep habits, and toddlers can have trouble sleeping even under the best of circumstances.

Between June 20 and 22 each year, the Earth tilts in its orbit in such a way that the sun falls at its highest point north of the equator, a phenomenon we call the summer solstice, confirmed the Old Farmer's Almanac. That happy moment ushers in a season's worth of long, lazy days... and nights of frazzled parents desperately trying to get their wide-awake toddlers into bed as the lingering rays of sun pour through the bedroom windows.

"It is absolutely more difficult for a toddler to go to sleep when it is light out," explains Nicole Johnson, president and lead sleep consultant for The Baby Sleep Site, an established sleep consulting service based in Ohio. She tells Romper, "Light stimulates our eyes to signal our brain when it's time to wake or sleep. With the sun setting later, your toddler is likely to 'fight bedtime' when they are trying to communicate that they are unable to sleep at this time of day right now."

Don't blame your child — blame our human anatomy. As the National Sleep Foundation explained, our biological clock is regulated by a cluster of cells in the hypothalamus called the Suprachiasmatic Nucleus, or SCN, which responds to light signals sent by our eyes. The SCN signals our bodies to release the sleep hormone melatonin when it's dark, and then lowers our melatonin levels when the light comes back. So when the longer summer days arrive, it's difficult for young children to settle down to their normal bed routine because their brains are telling them it's not time to sleep yet.

If it's any consolation, this problem is an age-old one. The 18th-century author Robert Louis Stevenson (Dr. Jekyll and Mr. Hyde) wrote a famous poem, "Bed in Summer," addressing the seasonal dilemma from a child's point of view. The last verse goes, "And does it not seem hard to you,/When all the sky is clear and blue,/And I should like so much to play,/To have to go to bed by day?"

So how can you help your child adjust to the shift in sunlight? Depending on your situation, it might actually help to delay bedtime a bit, so that it's closer to sundown when your child is under the covers. "For toddlers and preschoolers, it's usually best to start moving bedtime up in 15- to 20-minute increments until you find the 'right' time," explains Johnson. "Ideally, it will take around 10 minutes to fall asleep when you have the timing right." Once fall arrives and the sun sets earlier, you can shift back to your child's usual sleep schedule.

If you'd rather not mess with the family routine (and really, who could blame you if you don't?), Johnson says that there are ways to counteract the effects of extended daylight. "Parents can try to trick the mind and body into falling asleep earlier by darkening the room or house at least an hour before you expect your child to sleep," she explains. Buying blackout curtains (like these, available on Amazon) for your child's bedroom will create a restful atmosphere. Because the light from phones, tablets, and laptops also tricks the brain into suppressing melatonin, try cutting off electronic use an hour before bedtime, suggested the National Sleep Foundation.

The good news, reports Johnson, is that toddlers' nap times generally aren't affected by the extra summer sunlight. So you can try to let them sleep a little longer in the late morning or early afternoon, "especially if your child's mood and behavior have been affected," she says. Still, you can't force a child to snooze, and it's possible that your toddler may have days during the summer when they get less than the 12 to 14 hours of sleep recommended for this age group.

Once summer passes and the days become noticeably shorter again, you can think about readjusting your child's bedtime if they've been going to bed later. You'll know it's time by their behavior: "They may be more irritable or begin to sleep later in the morning," explains Johnson. Start inching up their bedtime and perhaps wake them a little earlier until your toddler is settled into a sleep schedule that works for them and for you.

With patience and experimentation, you should be able to find a summer sleep schedule that allows you and your child to get the rest you need.