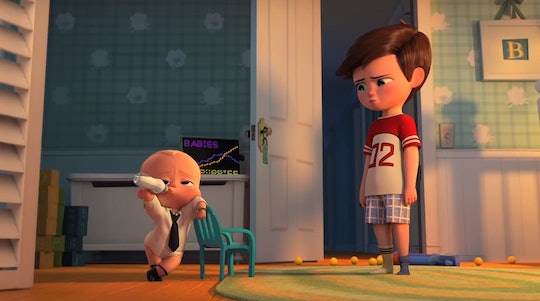 Get Ready To Suit Up: A 'Boss Baby' Sequel Is In The Works

First came the Trolls animated series on Netflix and now, coming to TV’s and tablets near you, is Dreamworks' The Boss Baby: Back in Business. This new animated series is based on the movie that you may have been forced to watch at least a dozen times since it was released. But since it's sure to inspire a renewed interest in the characters, it makes you wonder, will there be a Boss Baby sequel? The new Netflix series won’t be the last you see of the suit-wearing, talking baby and his older brother.

According to Deadline, Universal Pictures made the decision back in May 2017 to go ahead with plans for a Boss Baby sequel around the same time that plans for the next Trolls movie were approved. That being said, Boss Baby 2 is set to premiere in theaters on March 26, 2021. So, you know, just three years from now. It’s still better than nothing, though, right?

Another piece of good news is that Alec Baldwin is set to return to voice the baby himself for the sequel, which means there's a good chance that the rest of the cast members will be back to voice their characters as well. So get ready to hear Jimmy Kimmel and Lisa Kudrow once again in their respective parental roles.

The original Boss Baby movie was released on March 31, 2017 and just a month after its theatrical release, it was still dominating box office numbers. At the time, it had raked in roughly $360 million worldwide, as reported by Forbes. So it was really no big surprise that so soon after the movie came out, Universal announced that there would be a sequel in the works soon enough. Granted, fans will be waiting a few more years for that continuation to occur, but the best things in life are worth waiting for, right?

Before Boss Baby 2 comes out, though, Netflix is bringing more of the Templeton family to homes everywhere in the form of The Boss Baby: Back in Business, which premieres on the streaming platform on Friday, April 6. While the original movie left off with the warring brothers finally uniting and the Boss Baby reverting to a regular, non-talking and non-corporate CEO baby, the Netflix series takes place somewhere in the middle of all that.

In the trailer for The Boss Baby: Back in Business, there’s more of the same bickering and fighting for attention, but somehow big brother Tim is also working alongside his little brother at times. There’s also a brand new cast of voices to bring the characters back to life on the small screen, so fans of Baldwin as the baby will have to wait for the movie sequel for more of him.

The film left off with the revelation that an adult Tim was telling the story of how he met his little brother in order to prepare his own child for the arrival of her baby sibling, but chances are, the movie will pick things up where they left off before that. As in, the Boss Baby is still himself, with a supply of those magic bottles to keep him from turning into an actual slobbering baby.

While the plot of Boss Baby 2 has yet to be revealed, there could be an emergency like the arrival of yet another baby in the Templeton family to bring Tim and his little brother back together to join forces. Regardless, I’ll have no problem re-watching the Boss Baby sequel over and over again once it hits theaters.