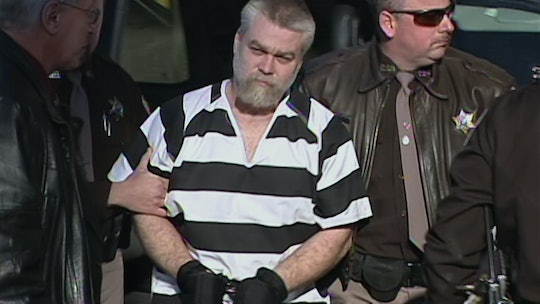 'Making A Murderer' Could Return For Season 3

Viewers have been following Steven Avery's murder trial since the first season of Making a Murderer, which aired on Netflix in 2015. His case became a national obsession, and when the second season premiered in early October, fans were quick to devour the ten new episodes. But Avery’s story is far from over, and viewers can’t wait to dive back into his case. So will there be a Making a Murderer Season 3?

As of now, Netflix hasn’t confirmed a third season, but it doesn’t mean that fans won’t get to see another installment of the series. In an interview with Cosmopolitan UK, the documentary filmmakers behind Making a Murderer, Moira Demos and Laura Ricciardi revealed that they were open to filming a third season. "Maybe [there could be a third season]... I heard that documentaries come in tens,” said Demos. “It's hard to imagine what a true end to a story with so many threads and so many people who have gone through so much, would look like. We certainly have deep connections to many people in this story.”

The duo also told the outlet that they were committed to telling Avery’s story until the end, and a third season would ultimately rely on how Avery’s case progresses, and whether or not they are allowed the same level of access. For Season 2, the filmmakers followed Avery and his nephew, Brendan Dassey as they filed for appeals. Both were charged and convicted with the murder of 24-year-old photographer, Teresa Halbach in 2005.

Both Avery and Dassey’s cases have gone the courts' rigorous appeals process to no avail. Dassey’s conviction was overturned, reinstated, and then brought in front of the Supreme Court, where judges refused to intervene. But Season 2 introduced viewers to Avery’s fierce new wrongful convictions attorney, Kathleen Zellner, who seems to have re-energized the quest for his acquittal. “The deeper we dig into the Avery conviction, the more evidence we uncover of his innocence,” Zellner wrote in a statement for her firm. “It does not matter how long it takes, what it costs or what obstacles we have to overcome — our efforts to win Mr. Avery’s freedom will never stop.”

In her most recent appeal, Zellner told the court that there was relevant evidence in his case that was not included during his trial, and that it could help exonerate Avery. But in September, a Sheboygan County Circuit Court judge denied her motion, reported the Post Crescent, and ruled that there was nothing new about the evidence she presented, and that both the prosecution and defense in Averys 2006 trial had complete access to it. “In light of all the evidence submitted, it is clear that the defense was in possession of the same evidence as the prosecution prior to trial,” Judge Angela Sutkiewicz wrote in the 11-page decision. “If the defendant did not open the evidence disclosed to him and was unaware that the specialized software was necessary to study it until his post conviction proceedings, he was not deprived of access to the information; trial counsel simply chose not to review it.”

But Zellner hasn’t given up, and despite the court’s rejection of her appeal, she continues to fight for Avery’s acquittal. In one post on her Twitter page, Zellner outlined her plan for Avery’s appeal going forward.“Steven Avery is at the beginning not end of his fight for freedom. We will wage this war no matter how long it takes, how much it cost or who goes down for this disgraceful prosecution. The State’s forensic evidence cannot be replicated,” she wrote. “Our appellate brief is due 12/20. We have multiple opportunities to overturn this wrongful conviction,” wrote Zellner in a tweet from last week.

With Zellner continuing to fight Avery’s case in court, there is a real chance that the Demos and Ricciardi continue to document the process, which means that viewers may get the third season they are hoping for.

Making a Murderer Part 2 is currently streaming on Netflix.