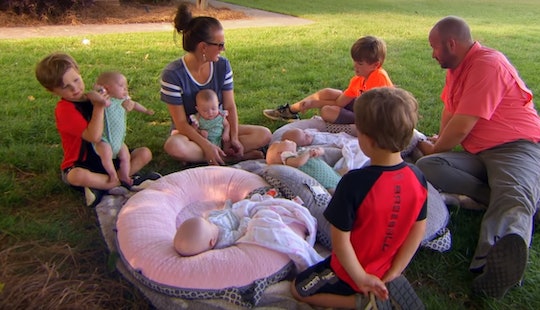 Season 1 of Sweet Home Sextuplets has been a whirlwind of babies, bottles, and enough dirty diapers to have their own landfill. Ok, that might be an exaggeration, but diapers are no joke, especially when it comes to six babies all at once. So will there be a Sweet Home Sextuplets Season 2? At this point in the season, there hasn't been an official renewal, but it would make sense for TLC to bring the Waldrop family back for another season next year.

It's mostly a matter of ratings and viewership. Right now, it seems like the family has already gained a following that's catching up to the likes of the Duggars and the Busbys. And that's really saying something about the Waldrop’s following thanks to Sweet Home Sextuplets.

Viewership this season has been on a steady rise, remaining close to the one million mark. Compared to other Tuesday night cable TV shows, the numbers are promising for the show's future. Below Deck on Bravo brought in 1.2 million viewers on October 10, while Mayans, M.C. on FX had 1.3 million. These numbers aren't far off from Sweet Home Sextuplets’ most recently recorded viewers of 1.07 million the same night, so it's obviously doing something right.

Before the Waldrops were cast on their own show, they already had something of a social media following because of their unique birth story. Courtney Waldrop was the first person in Alabama to give birth to sextuplets since 2011, marking the family for fame before their half dozen bundles of joy were even born. Because of that, the couple began documenting their journey on social media and now their official Instagram, gods_divine_nine, has more than 37,000 followers. Their Facebook page, God's Divine Nine-Sweet Home Sextuplets, has more than 93,000 likes and 101,000 followers. If that isn't an indication of how much fans have taken a liking to them, then I don't know what is.

On Instagram, Sweet Home Sextuplets fans are already ready for a Season 2 as well, which proves how well-liked the show already is. One fan wrote under one of the family’s photos of the babies, "Love you guys and love your show! Just discovered. I’m praying for a season 2! Was disappointed to see that next week is the season finale. Such a darling family." Others have tweeted that they’re shelling out hope for a Season 2, although it hasn't been announced just yet. Fans typically make or break a TV show and the fans of Sweet Home Sextuplets already seem to be plenty devoted to its future. Unfortunately, TLC hasn't said anything about a second season one way or the other. Yet.

Season 2 could easily continue in following Courtney and Eric’s journey as the parents to nine children total. As the babies grow, they'll present new sets of challenges and fun for seasons of content. And if the show wasn't meant to be longer than one season, TLC could have easily made it a short-lived TV documentary. Since it hasn't been officially cancelled, there’s always hope for a second season. As long as the viewership numbers stay on the rise and advertisers continue to back to show, there's a good chance that there will be a Season 2 of Sweet Home Sextuplets.