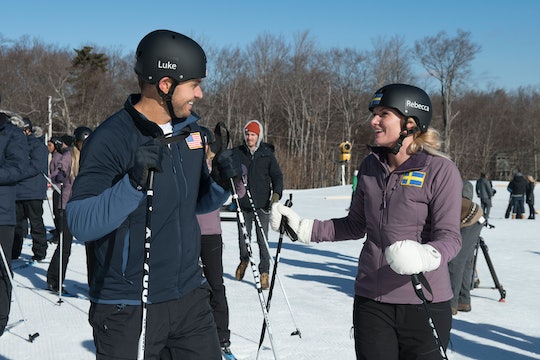 Just as quickly as the the first ever season of The Bachelor Winter Games began, it’s coming to a close, so the question has to be asked, if only to get us through the rest of the winter: will there be a Season 2 of The Bachelor Winter Games? As the newest series in The Bachelor franchise, it became a fast hit among most fans, who have eaten up the storylines and re-introductions of past Bachelor and Bachelorette favorites. But what’s more is that it introduced a lot of us to the international stars that many fans may not have known before the dating competition show premiered in February.

It doesn’t look like The Bachelor Winter Games has been officially renewed or canceled just yet, but that means there’s still hope that it will be picked up for a second season once it’s over. It may have been meant as a one-off season in response to the 2018 Winter Olympics, but I think we can all agree that it was a huge success.

As predictable as The Bachelor or The Bachelorette can be from season to season, the best thing about these shows is the wonderful cast of sudden celebrities who make Bachelor in Paradise extra special at the end of the summer. So when The Bachelor Winter Games premiered during the actual Olympics, it was like the winter version of a Bachelor Nation staple and I think I speak for a lot of fans when I say that four episodes wasn't nearly enough. If a Season 2 announcement comes during the World Tell All special after the season finale, we can only hope that along with it comes the promise of more than just a couple of weeks worth of episodes.

So far, The Bachelor Winter Games has averaged a 0.75 rating among the 18-49 demographic with 3.02 million viewers, and while that might seem low, it stacks up decently against other ABC shows that already have a following. How to Get Away with Murder, for example, has pulled in 0.93 so far for the same demographic with an average of 3.675 viewers so far for its fourth season.

As an already established ABC show with a comfortable time slot during the network’s TGIT lineup on Thursday nights, its viewership and ratings aren't that far off from that of The Bachelor Winter Games Season 1, which leads me to believe that there’s definitely hope. Since The Bachelor spinoff is only four episodes, it might be a little difficult to really judge and assess the numbers, but it’s been a welcome distraction for fans who prefer the group settings to the format of The Bachelor.

Chris Harrison spoke with The Hollywood Reporter about the fast success of the show and admitted that while it was always meant to be more of a special than a series, the potential is clearly there. "The whole show overall, I could not have been happier the way it turned out," he said a the beginning of February before the season began. "I’ve seen the first couple of episodes. It may be some of the best television we’ve ever produced — which scares me because now, instead of a one-off, we might be doing this every winter now."

In a separate interview with The Hollywood Reporter, co-showrunner Bennett Graebner agreed that although there hasn’t been an official renewal just yet, he can already see where he’d like the show to go as far as little improvements here and there. "I think in the future, I would hope that we would do more [episodes]," he said. "Another couple of episodes and another week, especially, would really allow those relationships to breathe even more." He added that although he and the producers of the show are game, ultimately, it's "a decision for the network, and I hope they say yes."

There is the question of how ABC could fit in The Bachelor Winter Games Season 2 next year if there are no Olympics to wipe out competing series on other networks. Since The Bachelor Winter Games has only been up against the actual Olympics, it’s hard to say how it might fare when airing at the same time as some regular shows on the big networks that are now on hiatus because of the actual Winter Olympics.

But if The Bachelor Winter Games has the numbers at the end of the season, I don’t see why the network wouldn't be able to fit the show in for a similar four or five episode run next season as well. Granted, no one wants that short of a season to play out once again, but it’s certainly better than nothing.