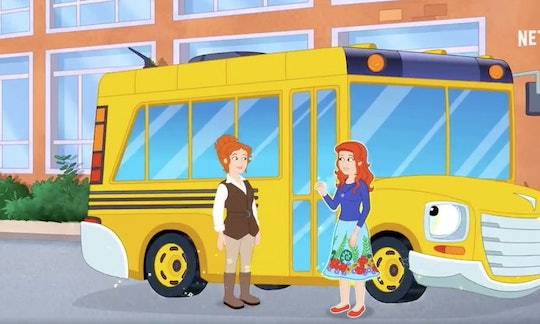 'The Magic School Bus' Reboot Is Just As Magical As Ever

There’s a lot to be said for '90s kid nostalgia and as played out as it might seem for millennials to get pumped about the revamped versions of old classics like Full House or Boy Meets World, the return of The Magic School Bus is just as exciting. And now that Netflix has rolled out its first season, fans are probably already asking, will there be a Season 2 of The Magic School Bus Rides Again? The Netflix animated series is still very new, but in the past, the streaming service has given new original programs more than one season to gain their footing.

With The Magic School Bus Rides Again, you not only have a fun and educational cartoon for kids to enjoy, but the nostalgia factor and the following that the original series had no doubt still holds up today. Not to mention the fact that Saturday Night Live’s Kate McKinnon is the new Ms. Frizzle, who’s actually the younger sister of the original teacher, which is another treat for adults viewers to enjoy. Although there hasn’t been official word on a Season 2 of The Magic School Bus Rides Again, the chances of Netflix renewing the show are pretty good.

The original Magic School Bus series premiered in 1994 and ran for four seasons with a total of 52 episodes. It was such a success that in 1995, the original Ms. Frizzle, voiced by Lily Tomlin, won a Daytime Emmy Award for playing everyone’s favorite adventurous teacher. With the current day computer animation effects and potential for guest star voices, The Magic School Bus Rides Again could have similar success.

Since becoming more of a go-to source for original content, Netflix has been able to churn out their Netflix Original series often enough throughout the year to always have something new on the horizon, including animated series. Netflix, in association with DreamWorks, premiered Trollhunters in December 2016 and a couple of months later, announced that Season 2 would come in 2017. And the longer running VeggieTales recently got a spin-off for Netflix called VeggieTales in the City, proving that the streaming service does prioritize children’s programming as much as the true crime that adults, myself included, love.

Unsurprisingly, you can also watch all four seasons of the original series on Netflix right now, so in the time it takes for you to power through the entire first season of The Magic School Bus Rides Again and for Season 2 to be announced and then premiere, you can go back in time with the original series.

Some of the more classic episodes include that time Ms. Frizzle and the class traveled inside Ralphie’s body while he was sick, or the time Ms. Frizzle transformed the school bus into a planet, so you know, NBD. But judging by the trailer for Season 1 of The Magic School Bus Rides Again, there will be more of the same hijinx, which definitely makes the reboot deserving of a second installment.

With The Magic School Bus Rides Again, you might be getting a reboot, but it’s also like a whole new series. Hamilton's Lin-Manuel Miranda recorded a new version of the Magic School Bus theme song to really bring the series to its new (and old) audience, and with at least one appearance from the original Ms. Frizzle, the series seems to stay true to its roots as much as possible.

Since the new Netflix Original is still so, well, new, there hasn’t been an official announcement about any future seasons to come, but it’s safe to say that the series is going to have similar success as the original.