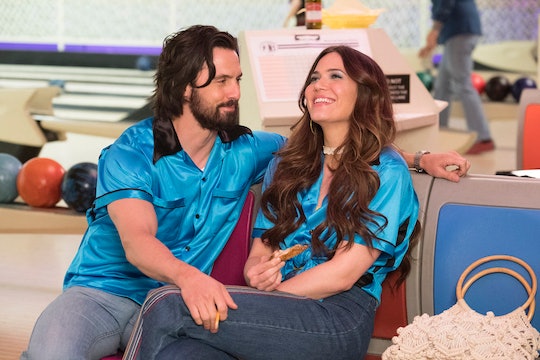 'This Is Us' May Introduce An Alternate Timeline In The Future, So Get Ready To See Grandpa Jack

Now that we all know the how, when, and why of Jack’s death on This Is Us, it’s time to focus on other things about the show, right? That would be the easy thing to do, but with the reveal of an adult Tess in a flashforward, it makes you wonder what else is in store. And thanks to a few very telling set photos that have been making their way through the internet — showing an older and grayer Jack Pearson — fans may be wondering: will there be an alternate timeline on This Is Us? The set photos would suggest that it’s certainly a possibility.

Although so much has already happened in Season 2, production was still going on over the last few weeks or so. In fact, just recently the cast was caught filming what appears to be a wedding scene, according to the images over on PopSugar. There was Mandy Moore in her usual older Rebecca makeup and glasses — and then right in front of her was the first ever glimpse of an aged Jack. Well, much more aged than fans have seen him yet. Immediately, it had fans wondering about what could have brought on this scene. Maybe it’s simply a dream sequence that has Rebecca wondering what could have been as Kate’s wedding day approaches, since that’s clearly where things are headed as the season comes to a close.

Or, maybe it’s an entire episode dedicated to an alternate timeline where Jack didn't go back into the house or he did, but he survived the smoke inhalation and lived to tell about it. Even wilder still is the theory that This Is Us is setting things up for an entire alternate reality, or a flash sideways, a la Lost, if you will. On Lost, it wasn’t exactly an alternate reality, but as any fan of the former ABC hit series will tell you, it would take hours to discuss such things, but it's close enough for this purpose.

After the two monumental episodes that followed Super Bowl Sunday, Milo Ventimiglia spoke to E! News about what’s next for his character, even though Jack’s death was finally revealed. And while he was a little cryptic in his responses about an alternate timeline down the road, he definitely made it seem like a possibility. "I think there's an opportunity to even dream a little further forward, you know the moments possibly that we didn't get that we could have gotten had this man lived on a little longer than his 50-some odd years," he said. He also gave the simple answer of raised eyebrows and a thoughtful "Hmmm" when reading sad This Is Us tweets with Elle wherein a fan asked via Twitter, "Where's my alternative timeline episode of #ThisIsUs where Jack never dies and we get to see him be an adorable grandpa?"

For This Is Us, the funeral episode "The Car" brought fans the show’s first ever flash forward that creator Dan Fogelman told Entertainment Weekly won’t be a one time thing. So once again, if flash forwards are about to become a thing with the show, then who’s to say that there won’t also be an ongoing storyline that shows fans an alternate timeline with Jack alive and taking care of his family, gray hair and all?

"Part of the promise of this show is the ability of our own stories to comment upon themselves, depending on what time periods you're looking at," Fogelman told Entertainment Weekly, adding:

What if we could hop into the stories of these characters 10 years later and figure out how they got from A to B, the same way we have with the past? So, it was always part of my initial pitch of this as a series. The future timeline that was just revealed carries the painting forward. That was always part of the plan from day one, that we would do [the flash forward and the funeral] in the same episode around this point.

He also told Deadline, however, that although "the future can play a big part in seasons to come," and there are plans for more flash forwards in the future of the show, there are other things planned for the remaining few episodes of This Is Us Season 2.

I know that an alternate timeline would be kind of out there, but you can't deny it would be interesting to see Jack in a world where he was still alive and well. Not to mention it would definitely help to lessen the blow of Jack’s death for so many fans.