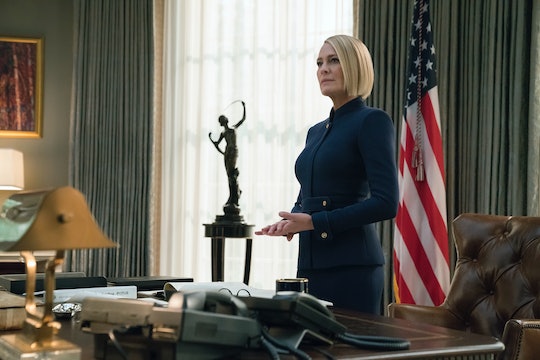 The Final Season Of 'House Of Cards' Is Finally Here

Before "Netflix and chill" even became a thing, House of Cards premiered as one of the first original shows from the streaming platform, quickly becoming one of the most popular shows on TV. And with Season 6 set to premiere on Nov. 2, fans are probably wondering if this will be the final season of House of Cards.

The show may have had the potential to span several more seasons, but after lead actor Kevin Spacey was accused of sexual assault, the show halted production. When it started back up, it was without Spacey and Netflix announced that House of Cards Season 6 would be its last.

Critics have already responded positively to the season ahead of its official Season 6 premiere. But despite any high praises, it's unlikely that Netflix will go back on the decision to end the long running political drama after Season 6 is over.

The allegations against Spacey came after Season 5 had already aired, but the way the season ended certainly set things up for a final season without the actor’s character. Spacey’s Frank Underwood stepped down as the president, paving the way for his wife and vice president, played by Robin Wright, to slide into the Oval Office. So fans can expect Season 6 to follow her presidency and the aftermath of her husband’s absence.

Wright told Variety that the plan was always for Claire to become the president, so not much that was planned will change once Season 6 premieres, except that Spacey won't be back to reprise his role as the former House of Cards POTUS. "My story, Claire’s story, was always going to be separate because he was moving into the private sector and she was going to be president," Wright said. "They were going to be living in separate territories, like two separate shows. So none of that changed, really."

House of Cards showrunner Frank Pugliese told Entertainment Weekly that although the knew of the sexual allegations against Spacey were shocking, the priority was always to continue the story and finish what they’d started. "The truth is, there was a story that was initiated — a story about a marriage and what was happening to the partnership," Pugliese said. "Even where season 5 ended, with Claire saying, "My turn," it seemed impossible not to tell her story. So whatever the conditions, however it broke, we had to tell her story."

He added that although some aspects of Season 6 would have to change to accommodate not only Spacey’s exit but also the finality of it all, the goal was always to finish the story and stay true to where it had been going for five seasons. He said that on the final day of shooting House of Cards, "Nobody wanted of leave. We just stayed. Some people stayed 'til daybreak. Nobody wanted to leave the set."

Fans who have followed the how since its 2013 premiere will probably feel the same way when the House of Cards final season premieres on Netflix on Nov. 2 and it marks the beginning of the end. At the very least, though, the show has been given a chance to wrap everything up and really end things on the right note with the remaining characters.