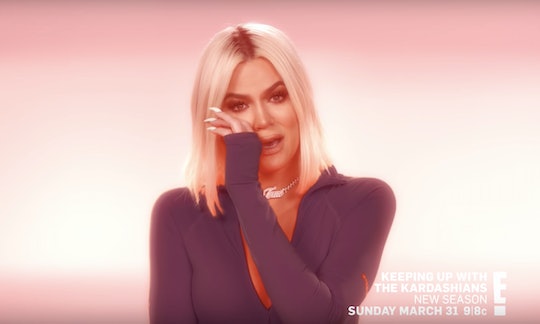 The interesting thing about (ahem...) keeping up with reality TV stars when their shows aren't on air is that we tend to get a preview of what's happening before the episodes are actually released. This is probably never as true as with the KarJenners, which is why many fans are likely wondering if Tristan Thompson will be in KUWTK this season. Well, days before its premiere, Season 16's trailer was released and revealed that the family is talking about everything that's happened over the past few months.

Judging by the trailer, it seems that the new season has a distinct focus on what's happening in Khloé Kardashian's life, specifically her relationship with NBA star Tristan Thompson. For those who haven't been following along, as Cosmopolitan reported, the two have officially separated after a long and complicated year of dating and co-parenting. This is likely due to the fact that, after allegedly cheating on Kardashian while she was literally waiting to deliver their daughter, True, according to E! News, more reports surfaced that allege Thompson cheated once more. But this time, with someone closely within the KarJenner universe: Kylie Jenner's BFF and roommate, Jordyn Woods.

There is confirmation that something did occur between Woods and Thompson, as Woods did a Red Table Talk interview with family friend Jada Pinkett Smith. However, thanks to tweets from Kardashian and the rest of this teaser, it seems there is some disagreement about what exactly went down.

Be that as it is, it's clear that the new season will be diving into this. Will Thompson actually be on the show? It's hard to say. It's possible that he could have made an appearance while they were filming prior to the incident with Woods happening, but it's probably safe to assume that he and Kardashian didn't hash out their issues IRL with cameras rolling.

With that said, it's clear that Thompson is definitely discussed this season. In fact, the whole thing seems to be a major plot arch, with most of the teaser alluding to issues between them, with only a few glimpses of the other sisters, and what they are going through.

"It just sucks it has to be so public," Kardashian opens the teaser saying. "I'm not just a TV show. Like, this is my life."

She goes on to say in another clip, "My family was ruined," before Kris Jenner is seen in another setting, holding a glass up and saying: "Here's to Jordyn and Kylie!" Khloé then comes back in saying, "Tristan might love me, whatever that means, but he has no respect for me, whatsoever."

When these pieces are tied together, it seems that they will definitely be at least covering what happens between them. The next clip shows Khloé screaming "Liar!" into the phone, though it's unclear as to who she is speaking with, or if she's being serious.

As for the other sisters, it seems that romance and drama are on the schedule this season. The teaser also shows Kourtney Kardashian saying that she's only ever been in love with one person in her life (presumably referencing Scott Disick) and then Scott Disick saying that he wasn't sure that he would be able to find happiness again, seeming to hint that he... did.

Kim Kardashian is also seen with Kanye West, talking about Chicago, and saying she's "reaching her breaking point." Of course, it was also around this time that the couple announced that they're expecting their fourth baby via gestational carrier, so that's covered too.

The teaser ends with Kylie Jenner saying, "I just hope that there is a light at the end of this tunnel, but I just don't see it right now," and then Khloé adding: "Sometimes the world forgets just to be kind, and that we're all going through something. Maybe just be a little more understanding, because it sucks."

It's true that the KarJenners have been a lot as of late, and it's exciting that we'll get to see more of what's been going on behind the scenes, too. The new season starts this Sunday, March 31.