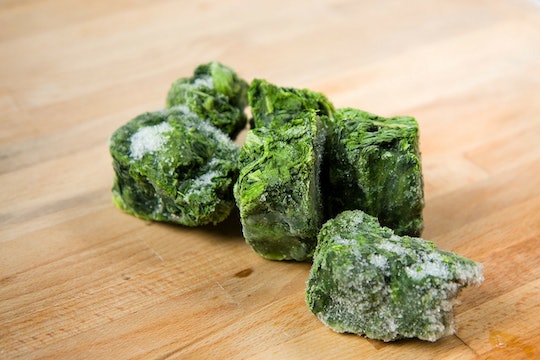 Will You Get Listeria From The Recalled Vegetables? It's Important To Monitor Symptoms

Over the past three weeks, a listeria outbreak and the ensuing nationwide recall of frozen vegetable and fruit products has heightened the public's awareness (and fear) of a potentially deadly infection called listeriosis. While people with healthy immune systems can usually fight off listeria before it turns into an infection, more vulnerable populations like the elderly, very young children, and pregnant women are at greater risk. Couple that with the fact that listeria has hospitalized eight people in three states, and even those not prone to illness are wondering how to be sure to avoid those recalled products. And, just as important, will you get listeria if you eat any of those fruits or veggies inadvertently?

This recall is massive, and it's no joke. Since April 23, upwards of 350 products sold under 42 brands have been removed from stores in all 50 states, and even parts of Canada. American favorites like Trader Joe's, Kroger, Safeway, Walmart, and Costco were all selling products potentially infected with listeria, so anyone feeling cautious about what they eat from their freezer (and that should be most people), can check out this list of recalled products. Those companies response to the scourge has been swift and comprehensive, but consumers need to protect themselves as well.

The best way to avoid sickness is to avoid its source. Lots of veggies purchased recently are likely safe, but here's a primer on what's possibly not: The now-recalled veggies were manufactured or processed at the Pasco, Washington CRF Frozen Foods facility since May 1, 2014, and have "best by" or "sell by" dates between April 26, 2016 and April 26, 2018, according to a statement from the company. To be absolutely sure that food is fine to eat, compare the UPC codes on the packages with those on the recall list from the Food and Drug Administration. A separate listeria-related recall has pulled a variety of nut products from grocery store shelves as well. This one focuses on sunflower kernel products, and the FDA provided a comprehensive list for that one, too.

But what if you've already eaten any recalled vegetables or fruits, for fear you or a loved on may have? The good news is that antibiotics can help fight listeriosis, but the possible more crazy-making situation is that a person with listeriosis may not experience symptoms for up to two months, according to the Mayo Clinic. Right now, this means that a person who has been affected by the outbreak may not yet be aware. Those initial symptoms include fever, muscle aches, nausea, and diarrhea, so it's vital to keep a lookout for possible signs of illness and seek medical treatment if they appear, especially if you're pregnant.

A person with a mild case of listeriosis may not require any treatment at all, so having consumed a recalled product may not be cause for panic. It's certainly possible that more cases may be reported in the coming weeks, so stay vigilant, monitor signs of possible symptoms, and toss affected products still lingering in the freezer. Because listeriosis can cause miscarriages, pregnant women should be particularly careful and talk with their doctors if they believe they may be infected. The CRF plant where the listeria originated is currently closed, so the ideal outcome from all of this would be improved safety standards, and no more hospitalizations.