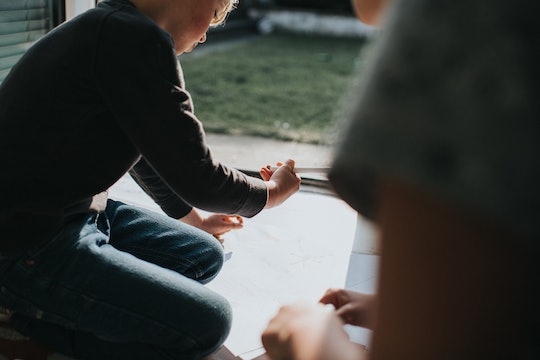 Even with a successful kindergarten year at a local forest school, my partner and I were nervous for our 6-year-old to enter public school for first grade last fall. Our son couldn’t read, write, or add. He’d never had a best friend. While his kindergarten classmates sat on the ground for circle time in the forest, he’d be self-isolated above them in a tree. Could he sit still at a desk? Would anyone check to see if he’d eaten, had water, or gone to the bathroom? Would he continue to be physically aggressive? Would they see my boy’s good self?

First grade, or rather the first seven months of it before the pandemic, was spectacular. His teacher was wonderful, and he finally learned to read. He discovered his talent for math and his love for art. He didn’t have behavioral issues, and he even got his first best friend.

Now that our son had entered the public school system, he was able to receive the supports written into his individualized education program (IEP) — occupational therapy, speech therapy, and special education services.

The occupational therapist helped my left-handed son hold his pencil properly. She was the first person to ever give him left-handed scissors. She gave him special exercises to help him learn self-regulation skills, and she worked with him on tying his shoelaces.

As many parents know, school can be magic. Teachers get kids to do all sorts of things they won’t do at home. I certainly tried to teach my son to tie his shoes, but it ended in shoes thrown across the room, a tear-streaked, red-faced boy running away from me, followed by months of refusing to wear lace-up sneakers. Like many kids on the autism spectrum, my son can go on and on about his latest obsession without letting others get a word in. Speech therapy helps with all areas of communication, including social aspects like back-and-forth conversations with other kids.

‘There are too many voices, too many faces,’ my son told me.

While my son picked up reading and math quickly from school, six months into the school year, it still took him days to write a few sentences. He could verbalize every part of the story he wanted to tell, but putting it on paper was another thing altogether. We’d just identified this as an area for which he needed special education support at his IEP meeting in February.

Then the pandemic hit. My son received no special education support for the rest of the school year.

Online learning was completely dysregulating for him. “There are too many voices, too many faces,” my son told me. Weeks went by in which he refused to attend his Zoom classes.

It took five weeks for occupational and speech therapy to resume online. And while he enjoyed his 30-minute one-on-one therapy sessions, I noticed his progress slow without the speech therapy group with his peers. Although his IEP calls for one, the group with other kids never materialized.

My son practiced cutting and forming letters, but because the Chromebook camera was aimed at his face, his occupational therapist couldn’t fully see his hands, and she certainly couldn’t properly adjust his hands. My son’s lace-up sneakers that he’d worked hard learning to tie before now gathered dust in the back of his closet for months. Now, they’re too small.

By law, school districts have to give kids with disabilities the supports they need to access the same quality of education as other kids. My son’s school district, and others across the nation, have not done this. Whether it’s schools not providing speech therapy groups or not offering an alternative learning modality for the students who can’t tolerate video classrooms, districts across the country are out of compliance on IEPs. Like many students with IEPs, my son has basically been without special education services since last spring.

I feel helpless as a parent of a kid with an IEP right now. What is my recourse? Log a complaint? Sue the district? If I — a white, middle-class, well-educated parent — feel disempowered, so must many other IEP families. Black and Latinx families already have the hurdle of getting their children equal opportunities in general education. Poor and working-class families have less time and resources available to advocate. And non-English-speaking families have the additional task of navigating an already complicated system in a foreign language. I can only imagine I am one of millions of IEP parents feeling disheartened and worried about the coming school year.

Second grade will begin soon for my son as distance-learning only for now. Parents are frantically forming educational pods across the country. Not only do these self-selecting pods bring up issues of race and class equity, but they also leave out kids with IEPs. We can’t just drop off our kids at Johnny’s house with a smile and a wave. Our kids need extra support in order to succeed — support the schools are legally bound to provide.

The stories we tell ourselves are important, and I don’t want my son stuck inside the lie that he’s not good at something just because he’s not being given the help he needs.

Over the summer my son began saying, “I’m not good at writing.” This presses a tender spot in me. The last time he told me he wasn’t good at writing, I told him I was terrible at writing as a kid too. “Really?” he asked with a surprised look on his face. I told him I kept at it and eventually it got less hard. It would happen for him too, I told him. “Wow,” he said almost to himself. “I can’t believe you were bad at writing.”

Truth is I was always good at writing. I’ve been afraid his whole life that he’ll internalize a false story that he is not good because he has a harder time learning certain things or because he operates a bit differently than other kids. The stories we tell ourselves are important, and I don’t want my son stuck inside the lie that he’s not good at something just because he’s not being given the help he needs.

Schools have a legal obligation to fully serve all kids with IEPs this fall. Being in compliance would allow our kids, even while sheltering at home, to continue to expand their learning and discover all the stories they can be part of.