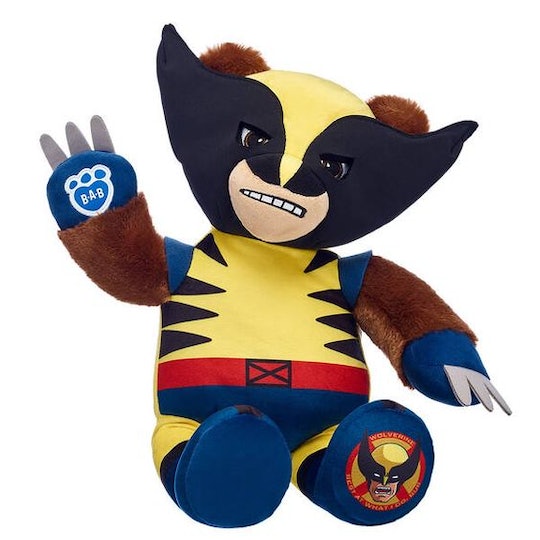 Hey Bub, Wolverine Build-A-Bear Is Here To Be Your Brooding Little Buddy

Who knew a teddy bear could look so cynical, brooding, gruff, and just plain aggressive? For those folks who are obsessed with Marvel's iconic X-Men series, get ready, because as of Sept. 11, Wolverine Build-A-Bear (also known as Logan) is here all the way from northern wilderness of Canada as an online exclusive collector's item for $35.

This adorable — yet oh-so-tough looking — bear comes complete with Wolverine's iconic black and yellow costume, (soft) claws, and official comic-book-drawing of Wolverine on his foot. Though he may look pretty fierce, as Wolverine fans all know, he does have a good heart deep down.

Since we aren't sure about the healing factor in this bear, it's probably best to keep him on your mantle if you want keep him as a collector's piece. However, if you or your kid needs a fun new buddy to pal around with and to keep on hand at all times for protection, this Wolverine Build-A-Bear is still super cuddly, even though he is part of the X-Men.

You can still customize this bear with the usual magical Build-A-Bear accessories, including scents and sounds. Sounds that would go just perfectly with your Wolverine bear include the "Action-Packed Sounds" that bring the "BOOM," "POW," "WHACK" sounds of a comic book to life. Or you could use your own voice to record his famous saying, "I'm the best there is at what I do... but what I do isn't very nice." For scents (though I'm not sure the real Wolverine would appreciate this very much), you can make your bear smell like various candy, fruits, and even popcorn, among other delights.

If you can't get enough Marvel Build-A-Bear friends, you should also check out the Captain America Bear, the Thanos Bear, the Captain Marvel Bear, Iron Man Bear, and even a Thor Bear bundle. Of course, there's also a Spider-Man costume and t-shirt in addition to a Marvel "80 Years" hoodie and boxers, and a Hulk t-shirt for your bear friend to wear. If you're more of a DC person, there's also an entire DC Build-A-Bear collection featuring Batman, Harley Quinn, Joker, and The Flash. There's even a Wonder Woman costume for your bear if you're so inclined. The DC logo bears are $30, and the sets are $60 — and that includes the boots, the voice box, and the costume. Also, don't forget that Sept. 21 is this year's annual Batman Day. So this would definitely be a perfect way to celebrate.

You definitely need to head over to the Build-A-Bear Workshop's website to grab your Wolverine Build-A-Bear today. Whether it's to add to your Marvel collection and placed next to all of your action figures, Funkos, or even other Marvel Build-A-Bears, or if you're purchasing him to be loved on and played with, he's definitely a bear that must be adopted as soon as possible. Not only is he unBEARably cute, but he looks like he'd be a pretty good guy to have by your side to protect you from Sabretooth and that "Merc with a Mouth" Deadpool. Though I wouldn't mind if Deadpool came over for a while — I think he'd be highly entertaining, albiet annoying. Maybe I'll stick with the Deadpool bear.