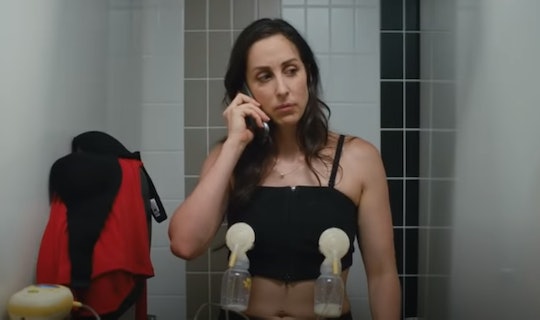 The newest season of Workin' Moms is headed to Netflix soon and just like the first three seasons, the episodes in Workin' Moms Season 4 will also tackle real issues. Between the complicated world of co-parenting, lice outbreaks, and trying to teach your kids responsibility, the cast of moms are as relatable as ever.

Note: Some light spoilers about Season 3 and 4's plots are below.

Season 4 of Workin' Moms is coming to Netflix on May 6 and fans can finally find out how working moms Kate (played by series creator Catherine Reitman), Anne (Dani Kind), Frankie (Juno Rinaldi) have been dealing with the drama from Season 3. When we last saw the moms in the Season 3 finale, Frankie was still dealing with her postpartum depression, Kate was struggling with her husband's infidelity and trying to decide if she should make things work with another love interest, and Anne's relationship with her daughter was tested yet again. It was a whole lot of drama for the women and Season 4 is going to deliver more of the same.

Workin' Moms, which originally aired on the CBC, is written and directed almost exclusively by women, with Reitman's production company she runs with husband (and co-star) Phillip Sternberg Wolf and Rabbit Entertainment making female-driven plots a priority, Reitman told Forbes in 2019. And the upcoming episodes of Season 4 of Workin' Moms look to be some of the best yet, in fact. Here's a look at what's in store.

The first episode of Workin' Moms Season 4, "Charade," gets off to a strong start, with Kate dealing with judgment from her friends about her romantic decisions and Anne trying to figure out how to deal with her rebellious daughter.

It looks like Lionel, Anne's partner, tries to step in to help give her daughter Alice some responsibility, and it might not go as well as he was hoping.

Season 4, Episode 3: "The Man In The Mexican Mask"

In "The Man In The Mexican Mask," it looks like Anne has a confrontation with Kate's husband Nathan at day camp, so you know this will be worth watching.

Kate has birthday party troubles in this episode and Jenny, a secondary character played by Jessalyn Wanlim who is apparently getting more screen time this season, fights for equal pay. Preach.

Kate and her husband deal with co-parenting issues while Anne tries to come to terms with her complicated relationship with her daughter in this episode.

No description necessary. Any parent who has dealt with lice knows it is the main story line of your life until it is gone, period.

Kate has some work issues with public relations while the other moms deal with their own drama.

The final episode of Workin' Moms fourth season deals with some life changes for one character and a resolution for another.

Don't expect things to be wrapped up too neatly, though, because the show has been picked up for a fifth season, and this is the good news we all need.