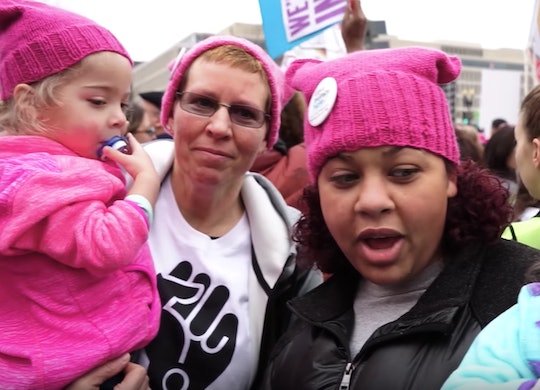 As the biggest day of protests in the history of the United States, the Women's March on Washington and its sister events all around the globe will endure as the launching pads of a major movement. And the pink pointy-earned "pussyhats" that many of the hundreds of thousands of women in the capital rocked on Saturday are already visual signifiers of the equality and protection of human rights for all people that the marchers are fighting for. Knitters from all over contributed the homemade hats to the cause beforehand, but one Tennessee yarn shop owner said the Women's March movement is "vile" on social media post-march — and instructed would-be customers seeking supplies to replicate this powerful symbol of resistance to fulfill their crafting needs elsewhere.

"The vulgarity, vile and evilness of this movement is absolutely despicable," The Joy of Knitting owner Elizabeth Poe wrote in a Facebook post Tuesday after, she says, a woman attempted to buy pink yarn there to start on her own women's empowerment knitting project. "... As the owner of this business and a Christian, I have a duty to my customers and my community to promote values of mutual respect, love, compassion, understanding, and integrity. The women's movement is counterproductive to unity of family, friends, community, and nation."

Poe's opposition to the protesters who wore the hats en masse Saturday seems to be with their methods rather than with their message. In a television interview with local CNN affiliate WKRN, she assured viewers that "we are all for women’s and minority rights" and said that the women and men who participated in the demonstrations the day after Donald Trump's inauguration that they were "going about doing the right thing the wrong way."

Still, the response to her post, which went live Tuesday, was huge. By Thursday evening, it had had racked up nearly 7,000 shares and 11,000 comments. Some of the feedback was supportive of the business owner's right to stand up for her beliefs, while others encouraged her to "pick up a history book" and reminded the self-proclaimed Christian that "standing up for justice for the oppressed, equality, and healing were the central messages of Jesus."

The hats themselves are the brainchild of the Pussyhat Project co-organizers Jayna Zweiman and Krista Suh, who designed the simple pattern to knit them in partnership with the owner of the Los Angeles-based shop The Little Knittery, Business Insider reported. The pointy-earned "pussy" theme is, of course, the women's answer to Trump's having joked about grabbing women by their private parts in an Access Hollywood video leaked shortly before the election. During a protest against a president who has so little respect for women that he dismisses his own chatter about sexually assaulting them as "locker room talk," it makes perfect sense to reclaim the word, to repurpose it to advocate for the advancement of women and minorities.

Poe, on the other hand, does not see it that way — at all. "This is starting to undermine their efforts," she told The Tennessean. "The topless women? I think if you want to get your point across you need to do it the right way and I just think that walking around dressed as a vulva is gross. Hatred is not acceptable speech."

The founders of the Pussyhat Project received hats from knitters all over the country, as well as countries like Scandinavia, New Zealand, and Canada, which they then distributed to create a stunning sea of pink in Washington. There was nothing at all vulgar about it. In fact, it was a perfect symbol of the "unity of family, friends, community, and nation" from which Poe believes the movement detracts. And that legacy will live on well beyond the march, as knitters can download patterns to continue producing them at knitting parties and knit alongs. It's the perfect opportunity to get together and keep up the work of the Women's March by participating in 10 Actions for the First 100 Days.

This week, for example, get together, knit, and write postcards to state senators about the issues that matter most to you. Nothing vile about that.