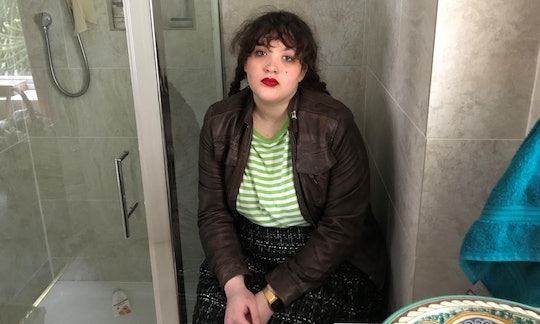 We Need To Talk About Why Moms Hide In The Toilet

On a recent afternoon, I dropped my daughter off for a short session at daycare. She wasn't happy. In fact, I had never, in the 15 months of her existence, seen Luna so distressed. Her face crumpled as chunky tears fell down her cheeks and into her ears. She screamed in that piercing way babies and toddlers reserve for their worst moments, all the while reaching out for me, clearly hoping I wouldn't go. I had to, though. Work deadlines and doctor's appointments awaited, and I knew she'd likely calm down quickly at the sight of other children. Still, I found myself needing to take a few minutes in the bathroom before leaving — like many moms, I hide in the toilet from time to time to get a break. As soon as I sat down on that toilet, I let myself break down.

I've spent many five-to-10 minute intervals sobbing on the toilet since my daughter was born. If not on the toilet itself, then on the side of the bath, the floor of the shower, or the corner between the beauty product cabinet and tub in our home. On afternoons such as this, I've even hidden away in public restrooms for a quick cry.

Luna's visible breakdown may have triggered my own that day, but I wasn't crying solely because she was. It was more like every frustration of the week had been building up, and that was the moment my body chose to find release. The toilet was the most private sanctuary nearby in which to do so: A place where I could silently sit with my (emotional) sh*t.

For mothers, the toilet is often the only place we get to be alone.

In conversations with fellow mothers, it seems like this isn't an uncommon practice. In fact, the bathroom is many mamas' preferred location for sudden and necessary weeping. It's also a preferred location in which to just take a damn break. According to Plum Organics, 56 percent of parents have sat on the toilet for "longer than necessary" to get out of their parenting duties. More than half of us!

Why the toilet, some may ask? Surely taking a stroll in the open air would be more calming. Hell, taking a moment to oneself anywhere that we don't also pee and poo regularly should be more soothing, right?

I knew motherhood would be difficult long before I went into labor, but I didn't know just how drained my body and mind alike would become.

The thing is, we're all too often encouraged to put ourselves very low on the list of priorities when we become moms. We're told to sacrifice so much of the people we once were, or could be, in the aid of being more present and available for our kids. We're conditioned to forgo any act that might be construed as selfish. Even when we actively try to do things differently — to set aside the me-time, to create separation from our children, or to prioritize self-care — it's easy to fall short. It's easy to become absorbed in the parenting role; in the irrevocably mega job that is raising a whole other person.

That all of this would get to be too much is more than understandable. For me, it's very often too much. I knew motherhood would be difficult long before I went into labor, but I didn't know just how drained my body and mind alike would become. I didn't know how much more poignant my day-to-day anxieties would be. I didn't know how much having a child to worry about would increase my other worries: Worries about money, about my career, about figuring out who the hell I'm supposed to be now.

I'm a big believer in the value of both solitude and crying, though. In terms of the latter, a good bawling session has just as much potential to loosen me up, or calm my mind and soul, than a bar of chocolate or movie binge. Sometimes, it's even more powerful than any incarnation of Hershey's. A cry is not only a physical release of emotion, but a psychological one; a metaphor for letting go of the things that are weighing us down, even if it's just to make room for new stressors.

The tears don't even need to be happy ones in order for this to be true. When I sat on the daycare toilet on the aforementioned afternoon, I was anything but happy. Instead, I was, all at once, feeling miserable, overwhelmed, and hopeless. I was questioning the state of my life, and mourning for a time when things were easier. Still, they were ultimately beneficial. I left that bathroom stall feeling more at ease in my body; more ready to take on whatever new sh*t was bound to hit the fan through the rest of the day.

Even when I don't cry — even when I only go into the toilet for a brief few minutes alone to sit, reflect, or wash my face — I feel better. I'm reminded of the simple fact that I am a person with needs, most of which haven't ceased to exist simply because I'm a mom now. I'm reminded to try to take care of myself, no matter how limited time may be. Even if all I get is five or 10 minutes in the bathroom, well, at least it's enough time to splash water on my face and motivate myself to keep going.

More Like This
21 Back-To-School Instagram Captions For All The Feels
I'm Having A Slow Lazy Summer For the First Time In 20 Years & It’s All Thanks To My Son
I’m A Newly Single Mom. How Do I Get Over My Body Insecurity?
Dr. Jill Biden Just Delivered Some Frank, But Powerful, Advice On Motherhood