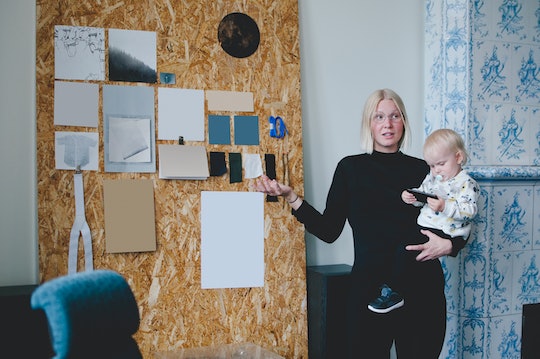 You *Can* Bring Your Baby To Work, But What Do Coworkers Think?

Around the dueling pianos of work-life and home-life, there is a school of thought that says a true feminist doesn’t go silently into the night: she brings her baby to work.

This way, she need not choose between career and motherhood: they will co-exist in a bouncer at the foot of her desk, warding off sacrifice and saving her money. This arrangement worked for Sarita James, the chief executive of Embark, who wrote about it for the New York Times, and for the mayor of Providence, Jorge Elorza, who brought his infant son to work. Elorza was generally met with support, while the major of Scranton, Paige Cognetti, who gave birth in November, recently came under fire for the same action.

With the average cost of daycare in the United States equivalent to the cost of some colleges, many families are looking for new options. Parental stress is at an all-time high as parents feel the crunch of balancing financial need with childcare costs, and that stress affects how we parent our kids. Having your child by your side ameliorates some of that stress. But how do coworkers feel about it?

A Reddit subculture exists to assure annoyed coworkers that yes, it is unprofessional/disruptive/infuriating, but for Lanae Lumsden, a mother of five in Avalon, Pennsylvania, who chose to take their child to work with her to avoid daycare costs, things worked out. Alena attended Lanae’s 9-5 desk job selling insurance for three years. “I had her trained to nap when I played jazz, and she was a self-soother and very outgoing,” Lanae says. “They still ask about her.” Alena is now in third grade.

Lumsden did get some negative comments from clients at times — one questioned if it was legal — but mostly it was a positive experience. However, her next child, Gregory, was not as easygoing as Alena, and after about eight weeks, the family sought daycare for him.

The arrangement with Alena worked, Lumsden says, because it was a small, locally owned business where the customers had known everyone for years. “I think in a regular office setting it could be harmful.”

What about in a very traditional office setting? Andrew,* manager of a large corporate office, sighs and rolls his eyes as the topic is broached. While empathetic to the plight of working parents, he thinks it is very unprofessional when his employees bring their children in for long periods of time. A father himself, he has brought his kids in for brief visits or special family-friendly events. In general though, he sees employees bring their kids and then fail to teach them the expectations of a work space. “I’ve had other people’s kids run into my office while I am on the phone because their parent was also trying to work while supervising them. I’m just trying to finish my work day and get home to my kids, and they’re delaying me doing so. I love to meet my coworkers’ kids, but keep it brief… It’s still a workplace.”

'Babies in the office? No.' wrote one New York Times commenter.

Andrew does offer employees flexibility to work from home or leave early if they need to due to a sick kid, but since their business is largely based around client meetings this is not always incredibly feasible. “We do the best we can to remain flexible.”

Pittsburgh-based manufacturer 4moms, which makes the Mamaroo among other high-tech baby gadgets, considers itself a family-friendly employer. In 2019, they were named one of Inc’s Best Workplaces, with generous maternity or paternity leave (12 weeks’ and two week’s paid leave, respectively, alongside flexible work arrangements an unlimited paid time-off). Does that mean, then, that employees can forgo daycare and bring their child every day?

Not exactly. There is no official policy on children in the workplace, but Stanton says that employees need to use discretion. Stopping in before a doctor’s appointment is common, but a child spending an entire day in the office would not be feasible. “Our offices are an open space, and our engineering team is regularly working on products, with tools and items that are not conducive to kids.” Kids might like to ride in a Origami stroller, that is, but they probably shouldn’t be hands-on building one just yet.

In her 2018 New York Times opinion piece, James wrote about her experience bringing her infant daughter Uma to work with her. For her, it was a beautiful and rewarding experience for a season, until her daughter became mobile and wanted to explore her world. While some readers shared support, the masses were largely critical of her essay, noting that her position of CEO likely made her experience different than the experience of the average American worker:

“Babies in the office? No.” wrote one New York Times commenter. “Several years ago I worked with a first-time mother who couldn't stand to leave her child so, after three months of maternity leave, she came back to work and brought the baby with her. It was a disaster for everyone but her.”

“This writer is very fortunate in her position and in her colleagues' acceptance. I doubt that would translate widely to the rest of the economy,” wrote another. A third writing from Bowling Green, Ohio: “No. Just no. No one REALLY wants a baby at work. It's nice that it worked for her, but no no no.”

Much of the success of James’ experiment was also dependent on her child’s personality: a baby who would sleep 15 hours per day in a sling, or in a stroller in the boardroom. Other mothers have reported less success with fussier children, and often coworkers are judgmental or even hostile to such an arrangement.

For me, having the flexibility to bring my daughter (specifically my youngest) with me to work was less about balance and more about necessity.

Danielle Slacker, who supervised a childcare center in West Virginia for several years, experienced both sides of the issue as a parent and as the boss. Her two kids attended the center as young children, so they came to work with her every day. This had many benefits from shortened commute time to discounted childcare rates. “It was convenient that they were there, but I found it ultimately to be distracting. I cannot personally hyperfocus on work as I want to because I am trying to combine my work self and mom self.”

She occasionally brings her kids, now elementary age, to the small office where she now works- but does not make it a regular occurence. “Others also do not. It’s just not something that happens very often.”

Amy Nelson, founder of The Riveter, a union and chain of female-centric coworking spaces across the country, has wrestled with the effects of the toxic work environment for mothers in this country for years. (In 2018, she authored the viral Forbes op-ed, “The Myth of CEO Work-Life Balance.”) Now a mother of four, she’s been chasing this “balance” since becoming a mother in 2014. She has been able to take her children into the office, and wishes more mothers had the same option. “For me, having the flexibility to bring my daughter (specifically my youngest) with me to work was less about balance and more about necessity. While I was able to take two months away from the office for parental leave, when I returned back to work I was traveling most weeks and when I was in Seattle I spent my days in back-to-back meetings.” Ultimately, she left corporate America to create her own startup where she makes her own rules.

Nelson notes that given the amount of time it takes to nurse and keep a milk supply up, it makes sense that mothers bring newborns to the office with them. At The Riveter, babies under 6 months old are a regular fixture in the office. “Having my daughter travel with me on business trips and attend occasional meetings allowed me to keep my milk supply up and ultimately reach my goal of breastfeeding until she reached seven months,” she says. “While I know this is a privilege, it shouldn't be an anomaly.”

More Like This
When Does A Baby Recognize Their Father? A Pediatrician Explains
Weed Moms Are Changing The Culture Around Marijuana
13 Aquarius Baby Traits & How To Support Your Little Water Sign
Even If Your Baby Sleeps Better in Your Bed, It’s Still Not Recommended
What Parents Are Talking About — Delivered Straight To Your Inbox