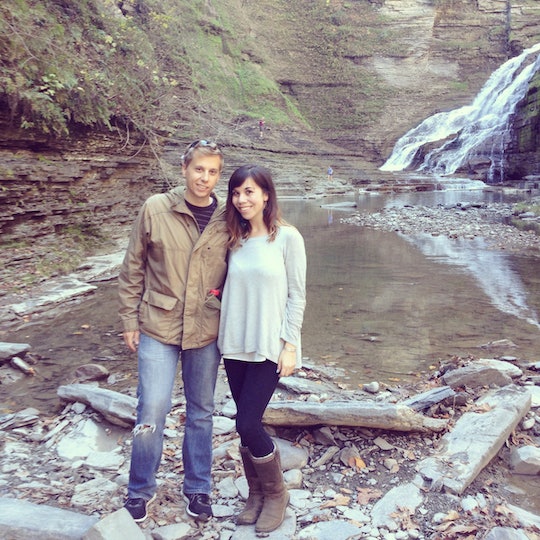 Throughout the past few months of being pregnant, I've realized something interesting: people have different reactions to my pregnancy depending on who's talking about it. If it's me talking about my future daughter, people are quick to say, "You must be so excited!" But if it's my husband, the response is a little bit different. “Oh man, it’s getting so close! You must be so freaked out!" they say as my due date approaches, or “Can’t turn back now!” Or: “Say goodbye to freedom! Ha-ha!”

These jokes drive me crazy because that isn’t who my husband is at all. If I’m being totally honest, he’s been ten times more calm and level-headed throughout my pregnancy than I have. But beyond knowing his specific personality traits, these comments are annoying on a much larger scale. When you nudge a guy and tell him he must be “so freaked out” about becoming a dad, you’re essentially reinforcing dated and tired gender stereotypes — which is why this joke we make about soon-to-be dads is so freaking annoying.

As any woman who has ever been pregnant knows, there are a lot of annoying, borderline insulting things that strangers feel totally comfortable saying to our faces. Telling us we’ll never sleep again? Cute. Complimenting us on our “glow?” Nah, that’s just sweat, but thanks. Think we “look like we’re having twins?” Maybe keep that one to yourself.

There’s no shortage of lists on the internet of obnoxious things that pregnant women hear on a daily basis. And it might seem like we complain a lot, but when your body is a topic of conversation for months on end, it can get a little tiresome, especially because they're rooted in clichés and stereotypes about pregnant women.

Fatherhood is not a life sentence, or some kind of "trap" that women set in order to tie men down or force them to commit.

Interestingly enough, however, those stereotypical comments aren’t just limited to expectant mothers. There are plenty of eyebrow-raising things that soon-to-be dads hear as well, we just don’t talk about them nearly as much. Case in point: the "you must be so freaked out" comment my husband gets when he talks about my pregnancy.

This joke mostly annoys me because it's inaccurate: my husband isn't "freaked out" by my pregnancy at all. When I’m feeling anxious or worried about something, he’s always quick to reassure me with logic and optimism. A few weeks ago, when I was scared I was going into early labor, he barely blinked an eye as we got ready for the hospital and drove up to the labor & delivery unit. If medals could be awarded for being the opposite of freaked out, my husband would win gold every time.

But the joke also annoys me because it makes some stupid (and frankly, sexist) assumptions about men and fatherhood. Fatherhood is not a life sentence, or some kind of "trap" that women set in order to tie men down or force them to commit. Not every guy suffers from Peter Pan Syndrome; some men are more than ready to grow up and be parents — in fact, some men are actually excited about it. That’s not to say that there’s no element of fear at play — becoming a mother or a father for the first time is a scary experience for everyone involved — but it’s not to the degree that people are so quick to assume.

The assumption is that soon-to-be moms are much more “ready” than their partners because of their natural maternal impulses, which is complete and total BS.

Furthermore, when we reinforce the “freaked out” dad trope, we also put the burden back on the women. Like somehow it’s OK that the dad is “scared” because the mom will step up and do most of the nurturing. The assumption is that soon-to-be moms are much more “ready” than their partners because of their natural maternal impulses, which is complete and total BS, as I can attest from my own personal experience. I, for one, have had many more moments of fleeting panic than my husband, as I'm quick to ask myself an endless amount of "what if?" questions that only lead to more worry.

There’s also an assumption that becoming a parent is the kiss of death to everything that came before, which is only true if you let it be true. Of course our lives will change after our daughter is born — it would be crazy if they didn’t — but having a kid isn’t some kind of reset button that wipes out the people we were before becoming parents. My husband and I will both continue to do the things that we love: see our friends, travel, and enjoy our life together. We’ll just do those things as parents. From the way we see it, parenthood isn’t some kind of “new identity,” but rather an extension of who we already are.

The weirdest thing about all of these comments is that they often come from strangers or very distant acquaintances. Very rarely do they come from people who are close to us, and that says a lot about our society and the odd level of comfort that we have when it comes to saying such personal things to people we don’t know at all. Perhaps it’s because pregnancy and parenthood are such universal elements; so many people have “been there,” and therefore it’s something people feel entitled to comment on.

But the fact is that you aren’t entitled to comment on someone’s pregnancy or soon-to-be fatherhood, no matter how much you think you are. And reinforcing gender stereotypes is just harmful to everyone involved. So next time you want to make a "knowing" joke with a dude you don’t know… just take a step back. Instead, maybe ask them what they’re excited for. Or tell them how great being a dad actually is. Or simply say “congrats,” because they deserve to hear that once in a while as well. There are so many positive statements to choose from, and “humor” doesn’t have to be a part of it at all.

More Like This
Yes, It’s Possible To Get Pregnant If You Have An IUD
Pelvic Pain During Pregnancy: What Causes It & How To Deal With It
7 Surprising Old Wives' Tales About Christmas Eve Babies
11 Signs Your In-Laws Don’t Like You