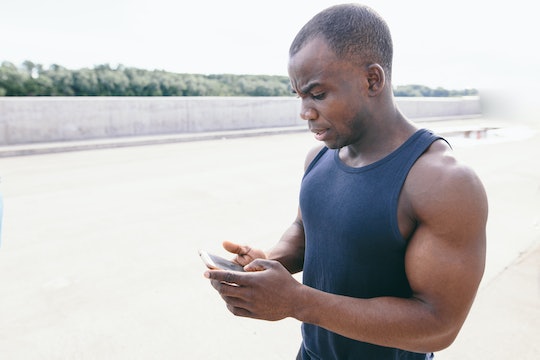 Tag husband gets some credit. Yes, he probably missed out on salt bae and math lady the first time around, despite the diligent efforts of his meme-literate wife, but he got there eventually. After straying from the path of righteousness, he saw the error of his ways and apologized for ignoring his wife’s tagging. The dad's Facebook status about his wife tagging him in internet posts went viral because it spoke to our innermost souls. The tag, you see, isn’t just something bored moms do, it’s our way of communicating “look at the flaming inferno that is my life!” to our favorite people when we are too busy to even sprinkle ourselves with dry shampoo. If I didn’t have tagging as a mom, I would have no friends, and probably no husband. So you are damn right I expect you to read what I tag you in.

Memes say a lot of things. Mostly, they’re a little balloon that floats through the internet to your friend's phone to say, “same” or "this." Tagging Husband didn't understand this at first, writing of his wife:

Every day she tags me in stuff on Facebook. Every day. Like several times a day. As if she bounces around the internet just looking for random sh*t to let me know is out there. Memes, events, stories etc

Yes! Yes, that is exactly what we are doing, partners until eternity! We are often nursing or cutting up grapes into tiny, non-chokable pieces while surfing through Insta for random sh*t and memes to harvest "etc," but that's pretty much it: We found this random thing, and we are dropping it at your feet like a tiny, dead sparrow brought to you by your clever, loving tuxedo cat. Yes, we expect you to toddle over to that URL and enjoy it.

And look, I don't just tag my husband and favorite humans on just any internet post, I tag them on the internet posts that I deem the best. I tag them on the ones that function as a sophisticated examination of the human condition. I do this because I don't have time for actually holding a phone to my ear or replying to any of my emails (my inbox, like the "junk room" in your house, is not for opening). Look, I say via tag, it us. Or sometimes, Look, @petesouza is dragging people again.

Me: I am going to stick to one, consistent sleep approach.

Also me: I’m going to let my baby sleep in my bed until they hit double digits because as long as I can nurse lying down no1curr.

In the first year of parenthood, I believe you should get a pass from being an active friend. It should work like a sabbatical — you get one year to disappear off the face of the earth without losing any accrued friendship credits. Ditto for your marriage. I had two kids in two years, so I shouldn’t have to be an actually worthwhile friend, spouse, or intellect until 2019, by my calculations. Until then, I can keep my relationships alive on the respirator by sending little nuggets like this via tag:

I am touched out, you guys.

Tagging your partner or friends works to acknowledge, apologize for, and embrace your lack of a parental philosophy. It is like a little Christmas letter: what did I get up to this year? I don't know, I helped my kid learn to eat string cheese, I painted half a nursery mural and then gave up, I pasted one baby photo in my kid's "My First Year" album. Mostly I sat in my nursing rocker while the world burned.

Likewise, I’m following politics and the news while quietly raising the next-gen of patriots, but I’d like not to have to form any coherent thoughts until I get my second kid stops falling out of his baby armchair onto his gigantic head. That’s what tags are for! All I need to do is find a nicely composed Facebook status by someone else, some text laid over one of those gradient backgrounds that make it look like a slide from a polemical PowerPoint presentation, and tag you there. ☝🏿 This, I'll say, @ing you. Read this.

It is true that I have a 50/50 chance of putting my underpants on inside out on any given day, and I know that sounds like I am living a horrific kind of life, but actually parenthood is one of the funniest skits I’ve ever been involved in. Like it might look kind of terrible, but actually it's sort of beautiful. I'm barely able to function, but I want you there with me. Occasionally, I'm going to send you a little postcard of my life, via a pic of sad Katy Perry taking a nap on the red carpet.

In fairness to Tag Dad, he eventually came around to the artform that is @ing someone you love on picture of a muppet:

But over time I've learned that she tags me in shit because it's either funny, insightful or relevant to us and our relationship.

That, right there, is it. Every time we tag someone, it's a tiny "ilysm." We might not have time to pen a whole thing on the state of life and the universe, but we can send you this one tiny thing that does just as a good a job. Don't like it? Don't @ me.