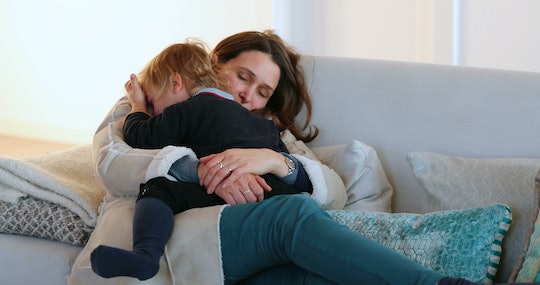 11 Ways You're Shaming Single Moms Without Even Knowing It

Parenthood and judgment, sadly, seem to go hand in hand. And while no parent or caregiver is capable of completely avoiding the shame and ire of others, shaming single moms seems to be a particularly "popular" pastime within, and outside of, the parenting community.

Even in this day and age, when it's well-known that there are many kinds of families, single parents are often, for lack of a better term, singled out. But the second most common family arrangement in the United States is children living with single mothers, according to the Federal Census Bureau's 2016 America’s Families and Living Arrangements report. A reported 23 percent of children live with their moms only, so single parents are more common than not.

There are lots of reasons why someone might be a single parent. Sometimes the story is painful, like an untimely death. But sometimes the story is strong and empowering, like a mom leaving an abusive or toxic relationship, or like the stories from the impressively independent, accomplished women I met in the Single Mothers by Choice groups.

I planned on single parenting, then found a partner and we decided to co-parent together. And because a lot of people don't know about the single-parent part of my experience, they aren't careful with what they say or do around me. As a result, I witness a lot of low-key ways people unintentionally shame solo parents. Whether it's people trying to help, or people intentionally saying hurtful things, often times the careless comments and actions of others just make a tired, awesome, hardworking solo parent feel judged and excluded.

I think we all get it — that single parenting can be hard — and we all want to be supportive. But check yourself. Is your "concern" or "empathy" really helpful, or is it making the solo parent in your life feel isolated, alone, and judged? Because if you're saying or doing the following things, chances are it's the latter: