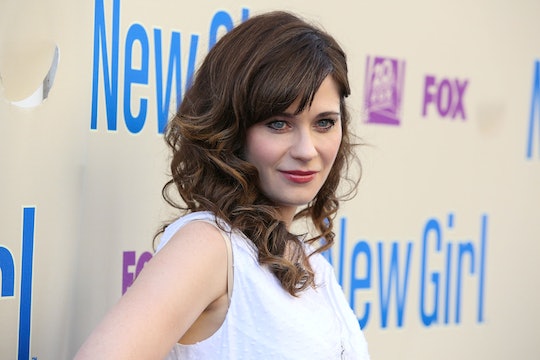 Mother's Day is just a few weeks away and even celebrities are already making plans for their big day. But of all the celeb plans I've heard so far, I think Zooey Deschanel's Mother's Day tradition might be the best and most relaxing one of all. If only because they seriously match up with my own family's.

Deschanel — mom of 2-year-old Elsie and 11-month-old Charlie — recently told Us Weekly that her favorite Mother's Day activity is avoiding restaurants, which is priceless. It's not that she has anything against restaurants, but can we all admit that aside from Valentine's Day, Mother's Day is the absolute worst time to eat out?

As a former waitress, I can attest that Mother's Day brunches are by far always crowded and overbooked, which means that the service ends up being shoddy at best. Also, a lot of times, gathering the whole fam to sit around some table and order food, which like Valentine's Day, is usually a prix-fixe menu, isn't always the greatest idea on a Sunday morning when everyone would rather be in bed. The eggs are over-poached, toddlers are drawing all over the white table cloths, and grandma can't even hear you over the dining room chaos.

There are not enough bottomless mimosas in the world to get me to sit through a Mother's Day brunch at a restaurant, so I'm wholeheartedly co-signing Deschanel's stance. Stay home, cuddle with the fam, and having a bagel in your pajamas is totally the way to go on this one.

Deschanel and her family will certainly be eating well that Sunday, though. She and husband Jacob Pechenik founded The Farm Project, which is an education-based initiative to teach people about where food comes from and even offers at-home gardening packages so your family or business can live the farm to table dream. The New Girl actor told reporters, according to Us Weekly, at the L.A. Times Food Bowl opening that:

Our whole mission is we’re trying to make sustainable, local food as affordable and easy as packaged and processed alternatives. That’s what our whole life is about right now.

So not only will she and her family be avoiding crowds on Mother's Day, they'll be focusing on preparing their own delicious meals, too. She added, according to Us Weekly, that home grown is a hit on her own dinner table, even with a toddler in tow:

Although New Girl's final season is airing now, Deschanel is busy with her work in food and her children. She said in the same interview with Us Weekly that she's excited for Charlie's first birthday and plans on getting him a cake that he can "mash his hands" into, which is all one can really ask of a kid that age. She said this past fall that having two kids has totally changed her life:

Nothing can really prepare you for it because you never again have a day where you don’t think of your kids first. At least for me, that’s what I think of first thing.... I’m always thinking of them. I’ve changed completely. You don’t realize what a sort of selfish existence you live in until you have kids.

It sounds like she's managing it all pretty well, and still getting to be a little selfish-in-a-good-way when it comes to laying down the rules for a peaceful Mother's Day celebration. Purple cauliflower and no restaurants sounds just perfect.