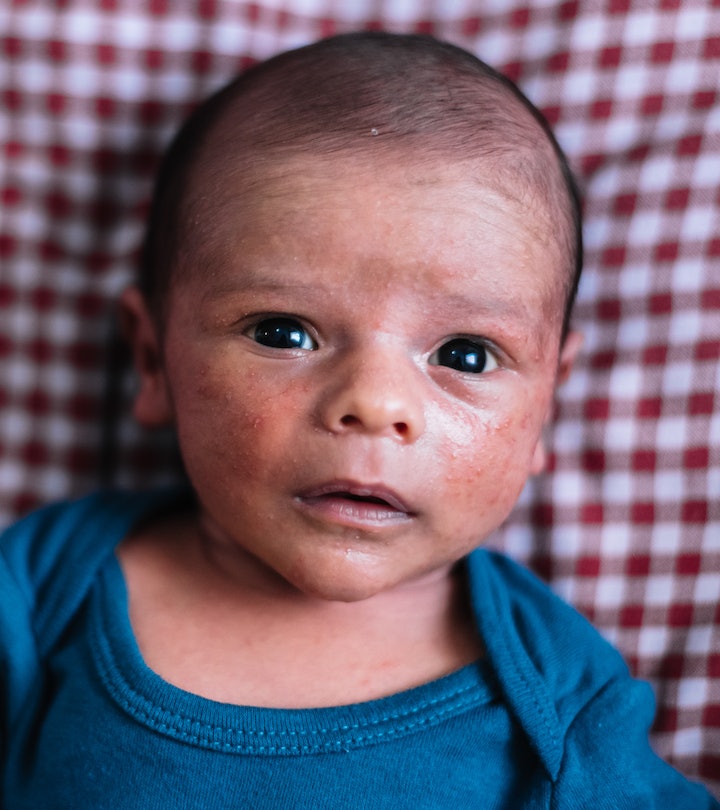 Everything You Need To Know About Baby Acne

Grown-ups spend an awful lot of time gazing at their newborns’ sweet little faces, so it can be quite surprising when they notice anything popping up on their babies’ soft precious skin. Surprising? Yes. Uncommon? No. In fact, baby acne (more specifically called neonatal acne) is an overwhelmingly common and typically harmless skin condition that affects newborns in their first few weeks of life.

But it’s not that your baby has turned into a (still-adorable) teenager overnight. These small pimple-like bumps are typically benign when they appear in the first few weeks of life — and often disappear without any intervention. “When these babies do end up in my office, it’s very rare that I will need to give any treatment other than reassurance that the process will resolve on its own, and generally within the coming weeks,” says Dr. Annie Grossberg, M.D., Director of Pediatric Dermatology at Johns Hopkins School of Medicine. She explains that baby acne is often looked at differently than grown-up, adolescent, or infantile acne (which develops after roughly 2 months of age).

In fact, roughly 20% of newborns are affected by baby acne, according to the American Academy of Dermatology, so it’s important for caregivers to understand what baby acne looks like, what is thought to cause (or not cause) the skin condition in newborns, and when to see a doctor — because trying to rid or clear up baby acne on your own is a pretty big no-no.

What is baby acne?

The short answer is that baby acne, or neonatal acne, usually appears as small pink or flesh-colored bumps (or papules), sometimes with a pus-filled white center (called pustules). These commonly begin to emerge on the forehead, face, and nose starting around 2 weeks of age and generally peak around 6 weeks. “Baby acne appears in an otherwise well and happy baby and doesn't cause any symptoms, like fussiness or itching,” explains Dr. Katie Lockwood, M.D., MEd, an attending physician at Children’s Hospital of Philadelphia Primary Care.

“Neonatal acne” actually kind of sounds worse than it often is, as “true acne in newborns is actually not as common as you would think,” says Grossberg. She maintains that what is often labeled as baby or neonatal acne is more commonly neonatal cephalic pustulosis — a neonatal acne variant caused by an immune reaction to natural yeast on the skin and characterized by small, pimple-like bumps that can occur on the face, scalp, neck, and upper trunk.

Dr. Nanette Silverberg, Clinical Professor of Dermatology at Icahn School of Medicine at Mount Sinai, says that baby acne can actually be divided into neonatal and infantile age groups. “Both have pimples or inflammation of the hair follicles that have attached sebaceous glands,” she explains. “But most neonatal acne resolves by 8 weeks of age. Thereafter it is termed infantile acne.” It is with infantile acne that caregivers might also see the development of comedones (whiteheads and blackheads) along with papules and pustules on the face and the body.

The exact causes of baby acne are not fully known, says Silverberg. She notes that both the skin’s normal flora (microorganisms, including that yeast called malassezia, which specifically relates to neonatal cephalic pustulosis) and sensitivity to hormones have been suggested to contribute to the condition. But while the role of hormones is “somewhat unclear” with neonatal acne, Silverberg warns that hormonal issues are a concern in infantile acne (and really up until age 8) and often warrant an evaluation by an endocrinologist.

Thankfully, though, there are no known underlying conditions that contribute to neonatal acne — and, likewise, “there is no way to prevent it,” explains Dr. Mona Amin, a board-certified pediatrician. Even if it is a response some babies have to maternal hormones that they were exposed to in utero, “it’s not the fault of the mom or anything the mom is eating or drinking.” Simply put: “Babies have sensitive skin, and some are way more sensitive than others.”

Baby acne symptoms: What does baby acne look like?

Neonatal acne most often concentrates on the face, and looks like small pink or flesh-colored raised bumps. “There isn’t a lot of variability in the size and appearance of the bumps — they generally look quite similar to each other,” Grossberg notes, adding that they sometimes appear white in the center, especially with neonatal cephalic pustulosis, as “pustules (small skin lesions filled with pus) are very common in this condition.” On the other hand, she continues, “infantile acne is a true acne process and can be severe, meaning that whiteheads and blackheads [called comedones] can give way to more inflamed pimples and even cysts and nodules.”

Of course, while neonatal acne is most common on the face, Lockwood explains that it can also appear on the neck and upper chest or back — but she warns: “Baby acne rarely appears below the nipple line, so if there are red bumps lower on the body or extremities, you should talk to your pediatrician.” Lockwood also notes that while “baby acne can present in varying degrees that may be described as mild or moderate, it shouldn't ever be severe and, if so, we would want to see the baby to ensure that it wasn't another type of rash or that there wasn't something else in addition to the baby acne that was making it look worse.”

When does baby acne go away?

“Neonatal acne generally lasts anywhere from a couple of weeks to two months,” says Grossberg. “It almost always peaks by 6 to 8 weeks of age and then improves quickly within a couple of weeks after that.” It should clear on it’s own, says Silverberg, especially with good hygiene that includes fragrance-free gentle soaps (not washing might promote growth of bacteria or yeast) and, if advised, emollients that aren’t too thick (to avoid blocking pores).

And for parents worried about its effects, neonatal acne “will self-resolve without any blemishes or scars,” says Grossberg, although she might prescribe an anti-fungal medication if pustules are severe. Conversely, infantile acne has “potential to cause scarring if left untreated.” So it’s a good idea to check in with your pediatrician if it isn’t clearing up or it starts to develop around this time.

How to get rid of baby acne: Should I try home treatments?

The answer is a resounding no. “Baby acne will resolve on its own within a few weeks,” explains Lockwood. “In fact, using over-the-counter acne products geared toward teenagers is not recommended for newborns. You can wash your baby's skin with water and a gentle, unscented soap twice a week. Do not pick, scrub, or pop baby acne.” Basically she says to be patient because “it may take a few weeks for all of the lesions to clear up.” Some doctors might even recommend an emollient that’s not too thick to avoid blocking pores. Talk to your child’s doctor about an appropriate skin care regimen for your little one.

When to see a doctor ‎for your baby’s acne

Experts say that there are certain red flags that warrant a visit to the pediatrician:

In general, Silverberg advises speaking to a pediatrician about new skin conditions in a newborn, as one might often be confused with another or might be occurring at the same time as baby acne. The good news is that most cases of neonatal acne will at some point be seen by a pediatrician, as babies are routinely examined at 1 and 2 months when they go to the doctor for vaccinations.

Rashes and other skin conditions that might appear alongside neonatal acne or are often confused with this condition include:

Although there may be a link between baby acne and maternal hormones, experts agree that breast milk (or formula) does not cause baby acne. “Hormones can be present in breast milk,” explains Amin, “however, the amount is likely minimal.” Similarly, Lockwood explains that while using breast milk to treat baby acne topically isn’t scientifically supported, “it doesn’t cause harm, so parents can try this if they want.” (If it causes further irritation to the baby’s skin, caregivers should stop.)

The big takeaway, though, is that moms shouldn’t stop breastfeeding in fear of exacerbating or causing baby acne, as Silverberg notes that “breastfeeding can help prevent infections, so keep it up as long as you can reasonably.” Likewise, while it is important to stay on top of any condition affecting a newborn and discuss concerns with a medical professional, parents shouldn’t really worry that anything they are doing or not doing (outside of maintaining basic baby hygiene) is causing their newborn’s skin to break out. Often, it’s just yet another part of parenthood that pops up without warning.