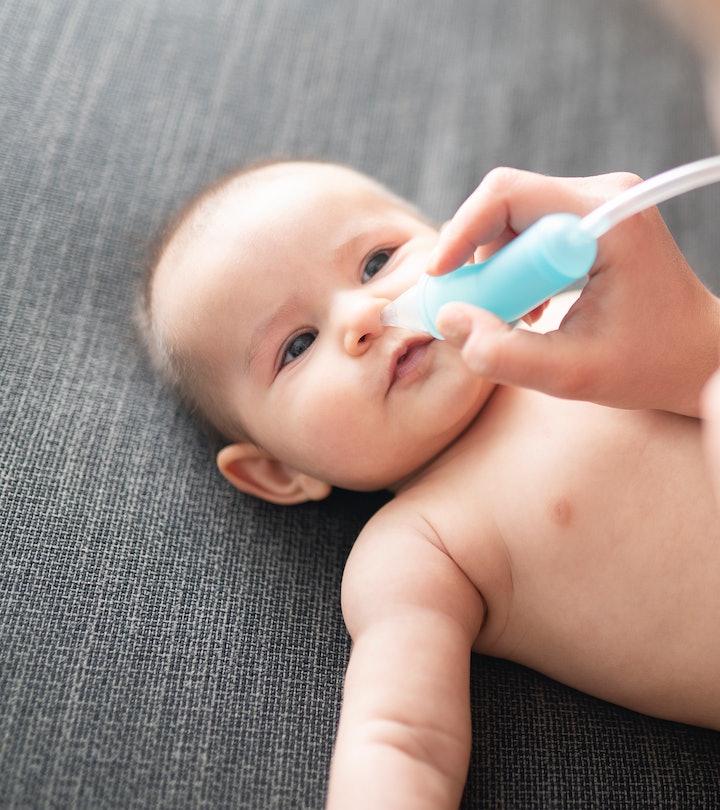 Doctors explain what’s probably going on, and what you can do about it.

One of the most jarring things for a new (or seasoned) parent is to see their baby coughing, gagging, or appearing to choke — especially because coughs can sound really intense coming out of such a little being. If you see your child choking on mucus it’s undoubtedly scary, but keep in mind that, normally, coughing is the body’s way of getting rid of something.

Your newborn may actually be born slightly stuffed up because of excess amniotic fluid in their nose or mouth (this may cause them to sneeze or cough a bit), or they may have mucus because they’re sick. Here, Romper spoke with two pediatricians and a family physician about why your baby appears to be choking on mucus, what might be going on and what you can do about it.

Why does my baby choke on mucus?

Some babies are born stuffy or with mucus in their throat and may cough in the first weeks and months after delivery. “Babies can be stuffy after delivery, especially those babies born via cesarean,” says Miami-based pediatrician, Dr. Mona Amin. “This is because they didn’t have the pressure of the vaginal canal to squeeze out fluid during labor. Having a mucusy baby is normal. Babies can gag on mucus or cough it up. If mucus is very thick, there is a small chance of choking, although this is very rare.”

A baby may also choke on mucus at night if they are sick (it can be harder to clear when laying down); excess mucus in baby’s throat can trigger their gag reflex. “They may appear to choke if there are excess secretions in the mouth,” says Dr. Sarah Schaffer DeRoo, a pediatrician at Children’s National. “Sometimes babies even spit up or vomit after coughing due to excess mucus to clear the mouth and nose.”

What to do when baby is choking on mucus

First, if you believe your baby is truly choking — i.e. not making a sound — call 911 immediately and begin infant CPR.

No parent wants to hear their baby coughing, gagging and sounding like they’re struggling to breath; In fact, it’s terrifying. While usually coughing means your baby is working to expel the mucus on their own, there are times when you will want to step in.

“If a baby appears to have too much mucus, you can gently suction the nose and mouth to help clear the excess secretions,” Schaffer says.

Suctioning your baby’s nose when they bothered by the congestion — for example if you can tell they’re not sleeping or eating because of it — is always an option. “If it’s bothering them, you can put some saline in and then suck out the mucus. If you are concerned, always feel free to check in with your pediatrician,” she says. If baby has excess mucus, try running a cool mist humidifier in their room at night, and keeping them well-hydrated with breast milk or formula. Water should only be given if baby is six months or older.

Is a baby gagging or choking on mucus a cause for concern?

If you hear your baby coughing, even if it sounds loud and intense, it’s likely a good sign — loud, audible coughing means they’re not choking.

“Infants and toddlers may cough on saliva if they are drooling excessively (for example, during teething), or from reflux from their stomach. They may also [cough] on secretions from the back of their nose (post-nasal drip) during an illness or with allergies,” Dr. Alexa Malchuk, a family physician at One Medical tells Romper. “Sometimes this coughing is described as ‘choking.’ Typically, it resolves on its own without any danger. In fact, a coughing sound means air is passing through the airway.”

True situations of choking will cut off the airway and a child or baby who is choking will make no sounds at all, may appear terrified, and the skin may change color, Malchuk adds. “True choking is dangerous and requires emergent medical attention. If you're concerned about frequent coughing, talk to your family physician.”

Although choking on mucus is extremely rare, it’s important that caregivers be prepared. New parents can and should take a CPR course to help ease worries. The best thing you can do when your baby seems to be choking or coughing up mucus is keep a suction bulb around when you need it, and try to take a deep breath and remember that baby coughs can sound extreme, but it’s their little body’s way of clearing out excess mucus and fluid naturally.

More Like This
Parent's Guide To A Baby's Dry Cough: Why They Happen & How To Treat
What PICU Means & What To Expect From A PICU Stay
There’s A Reason Your Baby Always Falls Asleep While Breastfeeding
Can You Breastfeed After A Breast Lift? Experts Explain