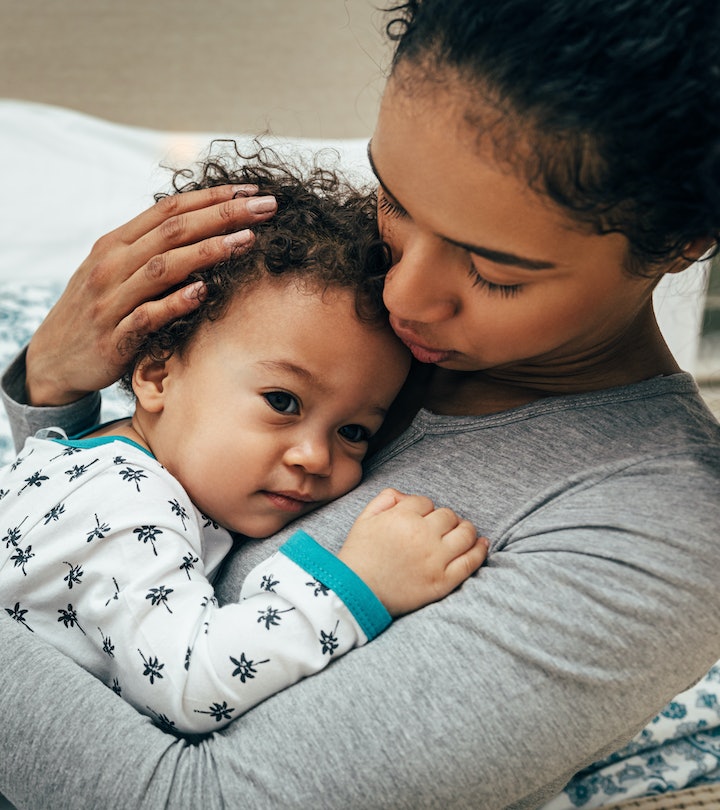 How to treat congestion at home, and when to call the pediatrician.

It can be super stressful when your tiny baby is sick, especially for new parents. Babies can seem so fragile and often it feels like your eyes and ears have to be on hyper alert at anything that seems off or different. If you’ve heard some weird rumblings in your baby’s nose or chest, you’re probably trying to figure out what’s going on ASAP — especially if you can’t physically see any mucus in their nose.

Most kids run around with a runny nose 24/7, especially if they attend daycare or school. But what if your baby sounds congested but there’s no visible mucus? What’s causing it, how do you treat it, and when should you worry?

My baby sound congested, but there’s no visible mucus

Because your baby’s nose is so tiny, it can be hard to see the mucus in their nose. In a baby’s nose, the tiniest amount of mucus can sound severe, explains Dr. Danelle Fisher, M.D., pediatrician and chair of pediatrics at Providence Saint John’s Health Center in Santa Monica, California. Even if you can’t see the stuff in their nose — or there’s nothing dripping out — if they sound congested, they probably are dealing with a stuffy nose.

However, try not to worry. “If the baby seems well and is eating well (even with the nasal congestion) and has no fever or cough, it is usually safe to watch at home for a few days before contacting the doctor,” Fisher says. Plus, there are ways to treat the congestion at home to try to make your baby as comfortable as possible as they fight off the virus.

What to do for baby congestion

“Home remedies to help with nasal congestion in a baby are aimed at trying to relieve the congestion with a device to remove the mucus,” Fisher says. “Hospitals usually will send a baby home with a nasal aspirator (also called a bulb suction) for clearing liquids or mucus from the nose or mouth,” she explains.

It’s important to note that you need to replace these bulbs frequently because mold, bacteria, and fungus can be inside of it, according to Fisher.

The best way to treat congestion in babies is by using salt water nose drops — not homemade ones — paired with a bulb suction, Posner says. You can even use a bit of breast milk in the nose to help loosen things up if the mucus is dried out and harder to remove, Fisher suggests.

“There are other devices, including the Nose Frida,” Fisher says. “This device has a tube connected to a mouthpiece; parents place the tube at the nostril and use their mouth to suction out the mucus. The tube has a foam reservoir so that the mucus does not enter the parent's mouth. This is a device that can be cleaned out periodically.”

So many moms, including myself, swear by this fantastic congestion-fighting tool. If you’re doing all of these treatments at home, but you’re still not seeing major improvement after a few days or symptoms worsen at all, it might be time to see the pediatrician.

When to call your pediatrician for baby congestion

Both experts say if your baby’s congestion is accompanied by a fever and/or cough or if they're unable to feed well because of the congestion, you should call your doctor.

You should also pay attention to their breathing. “If you start seeing your infant using his stomach muscles to help him breathe or flaring out their nostrils to get air, you need to bring them in,” Posner says. “Also, if they are continuously breathing really quickly, they need to be seen.”

Typically, a bit of baby congestion is nothing to worry about, and it’s hard to see the mucus in those teeny tiny nostrils, but if you hear it, it is there. It’s only natural to feel a bit worried when your baby is fighting a virus, and if you’re at all concerned or unsure about the best course of action, it’s always a great idea to call your pediatrician and get their advice.

More Like This
How To Get Boogers Out Of A Baby's Nose
Here’s How To Keep Your Baby Safe When Their Older Sibling Is Sick
Baby-Led Weaning: A Comprehensive Guide To Introducing Solids
Is It Safe To Take Benadryl While Breastfeeding? An Expert Explains