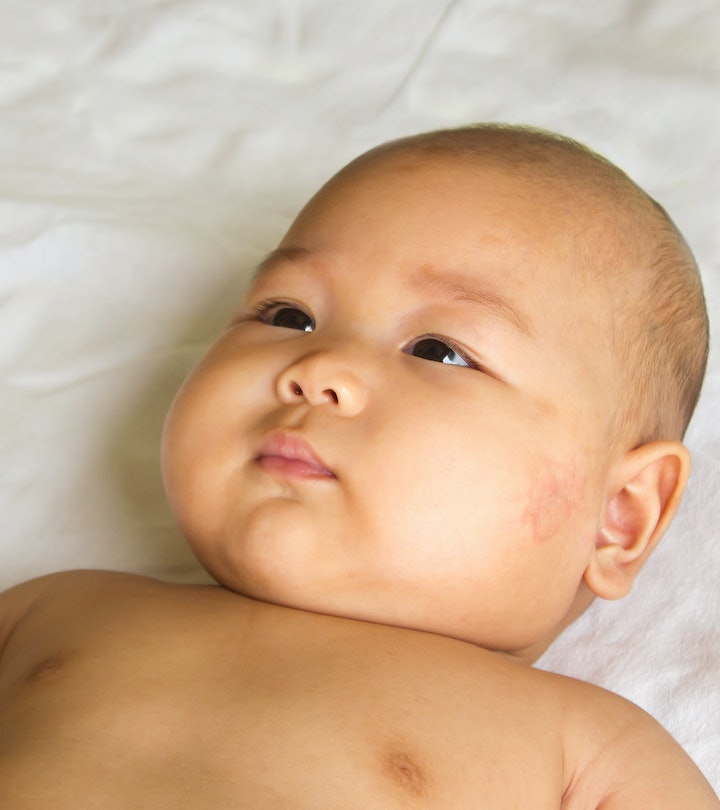 If Your Baby Seems Obsessed With Staring At The Ceiling, Here's What's Going On

If you've been a mom for longer than three minutes, you've probably noticed that your baby stares off into space an awful lot. It can seem borderline creepy — what do they see up there? — but it can also be worrisome. If you’re wondering why your baby stares are the ceiling instead of you, especially when you’re right in front of them, experts say that it’s completely normal.

Why do babies look up at the ceiling and smile?

“There are many reasons that a baby may have their attention pulled away at the ceiling or another surface in the home,” Tiffany Kimbrough, M.D., pediatrician, Children’s Hospital of Richmond at VCU, tells Romper. “They are attracted to light as infant vision is not 20/20 immediately after birth. Stark contrasts like light versus dark are easier for them to see. If there is a light or a fan on the ceiling, this may attract your baby's attention and garner a smile or reaction due to the different stimulation for them on the ceiling. This is one of the reasons why the holiday season is so fun with babies! Fans are another big hit because of movement. Babies love to see objects in motion,” Kimbrough adds.

"[Babies] enter a world full of light, sound, movement, and stimulation," Dr. Sanam Hafeez, a mother of two and a neuropsychologist in New York City, tells Romper. "There is a lot to take in. An infant’s brain is developing, absorbing, and processing their new surroundings. This is happening while their eyes are getting used to our world, and their vision is developing focus," all while also becoming accustomed to "visual and audio cues that represent safety, nourishment, and contact." Basically, it's a lot. But while it's completely normal for a new baby to stare at the ceiling, there are some things to consider if you suspect something else is up with your newest addition.

Could your baby staring at the ceiling mean that something’s wrong?

Remember, babies are often on their back, so fixating their eyes straight ahead to check out the fan, the ceiling texture, or maybe some lights is all new and completely fascinating to them. But Hafeez says that it may not be normal for a baby to stare at the ceiling after about 12 to 16 weeks. "[If] you are unable to attract the infant's attention away from the ceiling even for a short amount of time," there might be something else going on. "If they are not recognizing recurring and consistent faces like mom’s and dad’s," it might be time to consult with your pediatrician, Hafeez says.

"Since babies are always developing and changing, what is normal for a newborn may be very concerning for an 18-month-old," Dr. Mary Kohn, a pediatrician with the University of Colorado Hospital, tells Romper. So staring at ceilings? Very normal for newborns, not so normal for older babies.

"A newborn baby can see about 6 to 9 inches [in front of them]," Kohn explains. So your baby should be able to make and maintain eye contact with you by 9 weeks old. But when it comes to the ceiling specifically, there might be some contrast there that interests them, like the light fixture or a shadow. "Newborns and infants are visually attracted to stark contrast. For example, instead of looking out the window, they will fix on where the window meets the frame, where light meets dark," Kohn says.

You may even notice that your baby frequently crosses their eyes. Kohn says this is because "they are not focused on anything and their eye muscles are a bit weak." Usually this goes away by the time they are 2 to 4 months old, and can even be a reason why your child keeps looking up at the ceiling — "weakness of their extraocular muscles, the muscles that control the movement of the eyes," Kohn explains.

It's best to always check with your pediatrician right away if you suspect there may be something more serious going on with your baby. "Babies with wandering eye movements or those who never make eye contact may be blind or have very low vision," Kohn says. But these are not very common, and you shouldn't worry your baby has these issues just because they're interested in the ceiling.

For the parents who heavily rely on Dr. Google — don't. Hafeez says moms will likely get a lot of hits about autism and attention deficit disorder (ADD) when searching this topic, which are conditions that cannot be diagnosed during infancy. She wants parents to know that your child can be "perfectly fine and stare at the ceiling," but if you're truly concerned, check with your pediatrician who knows your child's history and can better assess the situation.

More Like This
Can You Help Your Baby’s Hair Grow?
Here's When Your Baby Might Start Sleeping Through The Night For Real
Everything You Need To Know About Army Crawling
How A Recall Of Contaminated Formula Made The Formula Shortage Crisis So Much Worse

This article was originally published on November 2, 2019