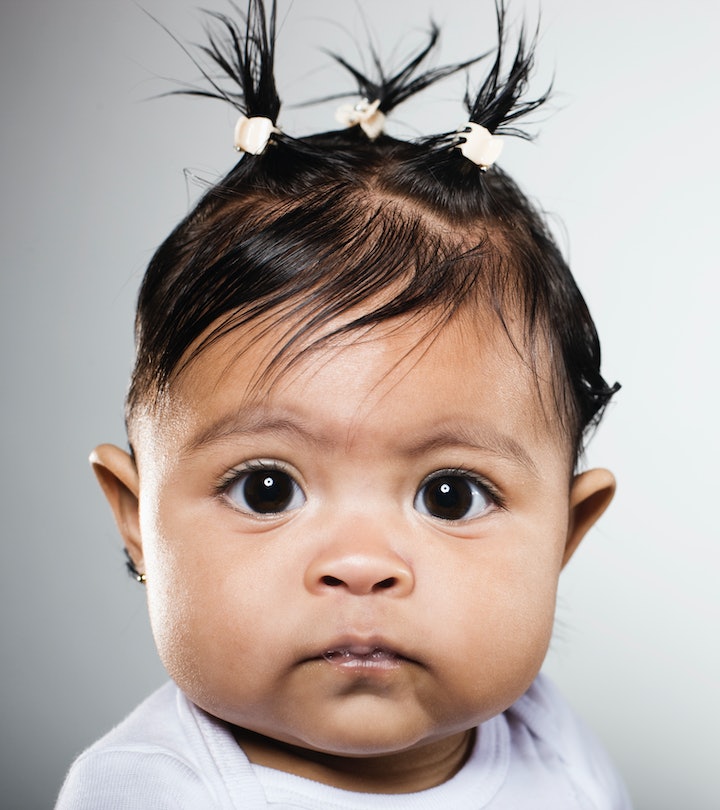 It may be common, but it can still be alarming.

One minute they’re cooing and adorably drooling. The next they are covered in spit-up, snot, and vomit. Ah, the gross joys (and concerns) that are par for the course in the baby phase of parenting. In fact, it’s not out of the ordinary for babies to expel all these fluids at once — and to actually throw up their phlegm.

“Vomiting is very common for babies, congestion is also very common for babies — so vomiting phlegm also ends up being common for babies,” Dr. Rebekah Diamond, M.D., pediatrician and author of Parent Like a Pediatrician, tells Romper. “Even when babies aren’t sick they tend to have congestion, and this can lead to vomiting up mucus since all people swallow phlegm and almost all babies vomit or at least spit up routinely.” Of course, even though throwing up phlegm may be a relatively common occurrence (there’s a reason parents are often armed with a burp cloth or bib), it’s important to understand both why it occurs and what it may signify, if anything unusual at all.

What does it mean when a baby throws up phlegm or mucus?

An increase in mucus or phlegm can indicate a cold virus or infection, but these fluids are always being produced by the nasal passages and respiratory tract — so their presence alone isn’t reason to automatically panic. “Anything that causes irritation of the passageways can cause mucus or phlegm to build up, and when those sticky secretions coalesce, it can be hard to simply swallow them down,” pediatrician Dr. Krupa Playforth, M.D., FAAP, founder of The Pediatrician Mom, tells Romper. “They can initiate a coughing or gagging reflex, especially in babies or young toddlers, and that can lead to throwing up.”

There is, of course, a difference between coughing up phlegm and throwing up phlegm, but they often go hand-in-hand for babies. “The term throwing up is most commonly used for expelling the contents of the stomach. When the sticky secretions are swallowed, they can cause nausea and stomach irritation, which can lead to vomiting,” explains Playforth. “Coughing is more of a reaction to irritation and postnasal drip in the back of the throat. In both cases, however, the body is reacting to the sticky secretions and trying to help you remove them.”

Diamond adds that babies are also more likely to experience post-tussive emesis, which means they can “cough and cough so much that it triggers vomiting — and, at that point, it’s all mixed together.” Babies, she explains, are also simply more prone to stomach irritation and vomiting when sick with a virus.

They are also more prone than kids and adults to spitting up and vomiting in general due to a weak lower esophageal sphincter. “All babies can spit up contents of the stomach as the muscle at the end of the esophagus is not fully developed yet, and this can lead stomach contents to come up,” explains pediatrician Dr. Sara Siddiqui, M.D., FAAP — adding that common ailments, such as excess gas and reflux (which may increase nasal irritation and can be caused by a multitude of stomach issues — including this weak muscle tone) can also result in spit-ups and vomiting. If babies are congested for any reason and swallow their mucus or phlegm, then these secretions might be in their vomit, says Diamond.

Are phlegm and mucus the same thing?

Sure, the words phlegm and mucus are often used interchangeably — as they are both secretions created by the body as defense mechanisms against bacteria, viruses, allergens, and environmental irritants, notes Playforth — but they are not exactly the same. “Mucus is created by the lining of the nasal passages and the sinuses (the uppermost part of the airway), whereas phlegm is created by the throat and lungs,” she explains of the gunk that comes from the lower respiratory tract.

Both are “a normal part of our body's defense system because the secretions — which are made of a combination of antibodies, water, enzymes, proteins, and more — trap foreign particles to help our body remove them more effectively,” she says. It’s when their volume increases that they become stickier and thicker — and, thus, more noticeable. And for babies, who often sound congested, she says that mucus is rather difficult to clear because they have teeny tiny nasal passages — adorable, but not exactly efficient in getting rid of even the smallest amount of excess fluids.

Phlegm, which Diamond says usually comes up with a deeper cough, tends to be a little thicker than mucus. But Siddiqui explains that both “mucus and phlegm may appear thicker or thinner … depending on how the immune system is responding to certain infections or irritations.”

What does the color of these secretions signify?

It’s not just the consistency of these secretions that can fluctuate — the color of these fluids can also vary. Experts say that there is no way to determine exactly what is going on in the body by the shade of your baby’s snot or spit-up, but here’s what the different hues could suggest.

“Most phlegm and mucus is clear to yellow,” notes Siddiqui. “If mixed with contents of the stomach and digestive enzymes, it can appear to be slightly thicker or stringy.”

Fluids from the respiratory tract that are green or darker can mean that the body is fighting a viral or bacterial illnes. The color simply indicates that the immune system is being activated — and not the specific cause, explains Siddiqui. For example, “Green mucus can be caused by both viral infections and bacterial infections, so the green color on its own is not a clear indication that a person needs antibiotics,” explains Playforth.

While Diamond agrees that it is a myth that certain colors alone can lead to a specific diagnosis, it is helpful to look at any changes in these secretions to determine the best course of action. “Bright red or a lot of dark brown can mean there’s blood, which can happen if there’s irritation from a cold virus or even irritation from lots of coughing or vomiting,” she notes. “It’s something often worth touching base with your pediatrician about.”

When is throwing up phlegm a cause for concern?

The bottom line is to trust your gut, notes Playforth — or your baby’s gut for that matter.

“Anything that doesn’t feel right is worth reaching out for,” advises Diamond. “If you have mucus or phlegm in a baby’s vomit and they have a cold, it’s pretty par for the course. But if something is signaling a red flag in your brain — they can’t stop, they’re having trouble breathing, they’re dehydrated, there’s a ton of blood in it for some reason — you either go to the emergency room or you call your pediatrician.”

Siddiqui advises taking extra precaution with babies under 3 months, as persistent spit-ups and vomiting — and even a cough or congestion — can be a cause for concern and should always be addressed by a doctor. “Projectile vomiting, or vomiting with pressure, could be a sign of a blockage and should be discussed with a pediatrician urgently,” she explains.

Per the experts, babies, infants, and children should be evaluated urgently if the following symptoms appear:

An important note: Decongestants and cough medicines are not recommended for babies and young children.

In general, coughing and vomiting are common pediatric issues — but sometimes pinpointing the exact cause “can be relatively challenging to work through,” says Diamond. That’s why it’s important to address any concerns with your pediatrician and not to simply diagnose any issues on your own, she says. And, of course, when it comes to babies, it probably makes sense to always keep that burp cloth or bib at the ready.

Dr. Rebekah Diamond, M.D., a hospital pediatrician in New York City, assistant professor of pediatrics at Columbia University, and author of Parent Like a Pediatrician

Dr. Krupa Playforth, M.D, FAAP, pediatrician based in Virginia and founder of The Pediatrician Mom

More Like This
How To Get Boogers Out Of A Baby's Nose
Can Elderberry Help Prevent Illness In Kids? Doctors Weigh In
Baby-Led Weaning: A Comprehensive Guide To Introducing Solids
Here’s Your Guide To Paced Bottle Feeding