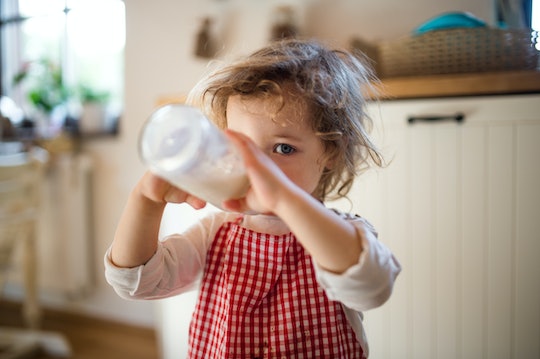 Don’t despair if your little one can’t have dairy.

You try to prepare well-balanced meals for your child. And in addition to making sure that there’s some sort of green or orange veggie on their plates, you probably also pour a cold glass of milk to wash it all down. But if you thought that milk had to come from a cow, think again. There are plenty of cow milk alternatives for toddlers and kids.

There’s no denying that milk does a body good. Once your baby transitions from breast milk and/or formula, the next best options to wet their whistles are water — and plain ol’ milk. In fact, kids ages 12-24 months should drink about 2-3 cups a day of milk. But drinking milk isn’t just about staying hydrated; it has a whole host of health benefits, too, nutritionist Heather Hanks, MS, tells Romper. “Many pediatricians recommend cow's milk to children because it's a good source of calcium and vitamin D, which is important for growing bones,” she says. It’s true: drinking milk helps your kid stay healthy and even can affect their height, according to the study, “Children who avoid drinking cow milk have low dietary calcium intakes and poor bone health.” Researchers found that kids who didn’t drink milk were not just shorter, but had lower total-body bone mineral content and smaller skeletons, too.

Still, some kids can’t stomach the stuff, whether it’s due to allergies or intolerances. “Children are usually able to digest cow's milk for the first few years of life,” says Hanks. “However, after that, many people can no longer digest dairy, making it a highly problematic food that induces inflammation in most.” To help beat the bloat, you might need to try some cow’s milk alternatives. “Non-dairy milk alternatives can be an excellent source of protein and important vitamins and minerals, including calcium, vitamin D, vitamin B12, and potassium, so long as the milk alternative is fortified with these vitamins and minerals,” Mary Wirtz, MS, RDN, CSS, a registered dietitian nutritionist tells Romper. Just keep in mind that you might want to introduce each one a little at a time over the course of a few days to ensure that your child isn’t allergic to any of them.

If your child doesn’t dig cow’s milk, they can try almond milk instead. “A low-calorie and low-protein option, almond milk has a good amount of calcium,” Brittany Lubeck, MS, RD, a registered dietitian tells Romper. But if your child has a nut allergy, almond milk might not be a good option. Says Lubeck: “Tree nut allergies are fairly common among kiddos, so almond milk and other nut milk should be avoided for those with allergies to tree nuts.”

And while almond milk is a popular option, be sure to read the label before you buy it, advises Hanks. “Many brands of almond milk are fortified with more calcium and vitamin D than cow's milk, which can be an anti-inflammatory alternative to cow's milk,” she says. “Be sure to go with unsweetened almond milk as many brands are sweetened with sugar and this can lead to obesity and diabetes.”

A plant-based milk made from (natch) rice, “rice milk has even less protein than almond milk, and probably the lowest amounts of other nutrients like fat, calcium, and vitamin D when compared to other alternatives,” says Lubeck. And in the study, “How well do plant based alternatives fare nutritionally compared to cow’s milk?,” rice milk was reported as being lactose free, so it’s good for kids who might have an allergy to traditional cow’s milk, soybeans, or almonds. While you can make rice milk at home, it might not have the same nutritional components that a store-bought brand might have. Plus, it typically contains more sugar, which makes it sweeter (and obviously appealing to young children), so be sure to look for rice milk that has been fortified with the necessary vitamins and minerals that your child needs in their diet.

If you’re looking for something middle-of-the-road, oat milk is a good option. “Oat milk is sort of in the middle of the pack in terms of what it offers,” says Lubeck. “It has half the protein of cow’s milk but is a good source of calcium and vitamin D. Little ones with celiac disease or a gluten allergy should only consume oat milk that is certified gluten-free.” Another benefit: oat milk has been known to decrease LDL cholesterol, according to a PubMed study. That might not benefit a 4-year-old, per se, but it could pave the way for healthier drinks in your home for the entire family.

Made from soybeans, soy milk is a plant-based drink that can be served in place of cow’s milk. “This option has the most protein after cow’s milk, with about 6 grams of protein in one 8-ounce serving (cow’s milk has 8 grams of protein in the same serving size),” says Lubeck. “It is also a fairly good source of calcium and vitamin D when compared to cow’s milk.” But again, you have to watch out for those dang allergies, specifically to soy, so skip it if your child gets an allergic reaction to soy.

Coconut milk is yet another option in your cow milk alternative arsenal. It’s a good source of calcium, and offers 5 grams of protein per serving, but it’s questionable how much coconut milk you’d want to give your kiddo. Coconut milk tends to be higher in saturated fat, according to a PubMed study, so you might want to make it a once-in-a-while drink, and stick to lower calorie (and healthier) plant-based milks instead.

If you’re planning to try alternative milks, it’s important to keep in mind that each one has their own individual taste, something that a child who’s used to consuming cow’s milk might have to get used to. “Rice milk and oat milk are fairly sweet, while almond milk is a little bitter,” says Lubeck. “Many of these milk alternatives do have sugar or other sweeteners added to them to enhance their flavor, but it would be best to buy the sugar-free versions, especially for kids.” And once you find an alternative that your kiddo actually likes, then milk it for all it’s worth.